‘We must urgently reduce our consumption ... and then pray’ — Bay water boss

FADING FAST: The Churchill Dam, pictured, and Impofu Dam, both on the Kromme River system west of Humansdorp, whose supply has long been the lifeblood of Nelson Mandela Bay. But today they are close to empty.
Image: SUPPLIED

There is less than 3% of water left in Nelson Mandela Bay’s storage dams and when these run dry, so will more than 100 areas across the city.

In an address to a closed session with councillors on Tuesday, followed up with a statement on Wednesday, water and sanitation director Barry Martin said unless consumption could be cut by 50 megalitres a day, this grim scenario was a certainty.

“Even with the successful expansion of the Nooitgedacht treatment works there is not enough water at the current rate of consumption to allow us to distribute supply to these 107 suburbs, which constitute 40% of the metro,” he told councillors.

“In 38 days we will no longer be able to deliver to this area, which includes the western suburbs, the Uitenhage-KwaNobuhle area and peri-urban parts like Greenbushes, where the St Albans Correctional Services Facility, one of the biggest prisons in the Eastern Cape, is situated.

“It’s a very precarious situation and the elephant in the room is the basic water supply we need for sanitation.

“We have no choice but to urgently reduce our consumption.

“Then we need to go down on our knees and pray.” 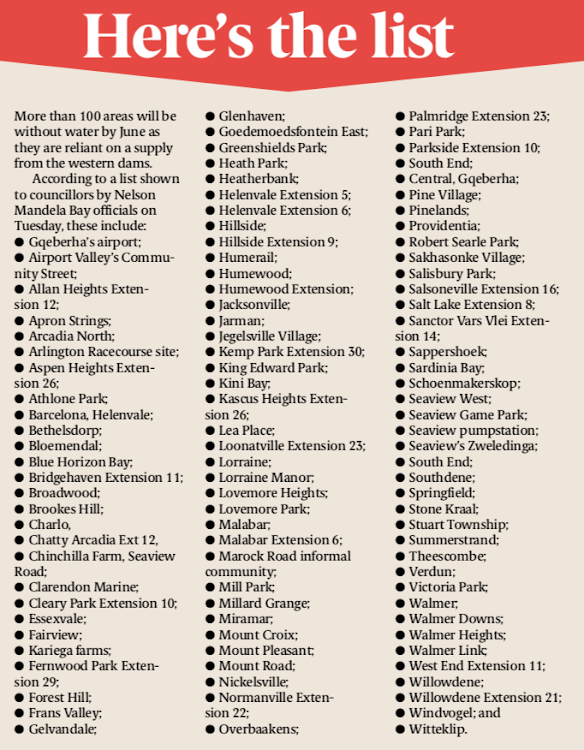 There is less than 3% of water left in Nelson Mandela Bay’s storage dams and when these run dry, so will more than 100 areas across the city.
Image: Supplied

A recording of Martin’s presentation to councillors was leaked to The Herald.

In his presentation, Martin said though in July 2021 the combined level of the Bay’s western dams was 10.8% and was now at a similar level almost a year later — at 13.2% — the metro was in a worse position.

“Though the Kouga is in better shape, we share the Kouga with the Gamtoos agricultural community and we have just about used up our full allocation from that dam.”

He said in four to six weeks the metro would not be able to extract any more water from the Impofu Dam, even with the low-level pumps on barges that had been deployed on the dam for more than a year.

“The real low percentages are in the Churchill and Impofu, the supply of which is traditionally the lifeblood of Nelson Mandela Bay.

“That is why we are in a worse position now with July 2022 still to come.

“We have just 2.53% of water left altogether from our western storage dams for us to extract for human consumption.

“And that means that potentially unless we have significant rainfall, or we urgently and dramatically reduce our consumption, by the end of May or early June, Churchill and Impofu will run out and the 107 [areas] which rely on this supply will hit dry taps.”

Martin said based on the current consumption, the dams were dropping an average of 0.06% each day.

Linked to this, according to the SA Weather Service forecast, below-average rainfall was predicted for the metro for the next four months.

Joburger Gill Gifford visited her mom in water-scarce Port Alfred in the Eastern Cape for a week. This is how it went
Opinion & Analysis
1 year ago

An analysis of past dry years gave little cause for hope either.

“So that’s a  period of just over 10 years and we are now into the seventh year of the current drought, which has been with us since 2015,” he said.

Some good news was that an extra 30 megalitres a day would be delivered by the Coega Kop, St George’s, Bushy Park and Moregrove boreholes.

“But that will only be after July-August when they are completed.”

Martin said another piece of good news was that with the integration of the phase three expansion project, the Nooitgedacht Water Treatment Works at Sunland on the northern perimeter of the metro was now producing 209ML/d.

“But our current consumption at 280ML/d is still too high for this supply to save us.

“Once we lose the dams, our overall supply will drop from 272ML/d to just 231ML/d from Nooitgedacht plus the bit of water we get from the old Sand and Bulk dams, the Kariega spring and Groendal Dam.

“If we don’t save water in the area north of the Stanford Road pump station, we will not have any to transfer to our southern and western areas that rely on the main storage dams, even when the KwaNobuhle pump station is complete.”

He said if the water-saving scenario could be achieved, it could be the metro’s saving grace.

He said water-shedding was not an option because it would result in skewed supply to high-lying and low-lying areas when valves were closed.

It would also compromise water quality as the velocity of water moving through the pipes changed and sedimentation was loosened.

In addition, it would increase pressure on the metro's already fragile and overworked water grid.

There would be more burst pipes and more water would be lost than saved.

His team would be pressing forward with this strategy if the dams failed.

But he said these interventions with all the security, cost and organisational challenges they would trigger, could still be avoided.

“We need to use a maximum of 50l per person per day and not more than 6ML a month for an average four-person household.

“That will bring down our consumption dramatically, but only if everyone plays their part.”

Residents in Tongaat, north of Durban, are planning to take the streets on Thursday in protest against not having a water supply for more than 20 ...
News
1 month ago

On Thursday, mayor Eugene Johnson is due to host a multiplatform public information session, starting at 6pm.

It will also be accessible via the municipality’s Facebook and YouTube sites and on Mpuma Kapa TV on channel 260 on DStv.

Some flood-hit areas in Durban still have no access to water or are battling with irregular supply, KZN premier Sihle Zikalala told a media briefing ...
News
1 month ago

LISTEN | Your children will not be able to escape the impact of climate change, say experts

It is too late to avoid the impact of climate change which, according to experts at the Centre for Environmental Rights, can already be felt across ...
News
1 month ago

The impact of the recent devastating floods on the ocean will not affect this year’s sardine run in KwaZulu-Natal.
News
1 month ago