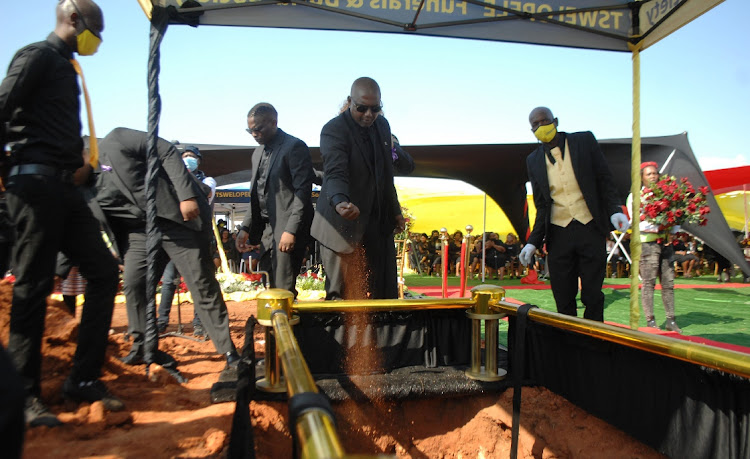 The accused in the Hillary Gardee murder case have decided not to opt for bail, according to the prosecution.

Earlier the family spoke outside the Nelspruit magistrate’s court where three men arrested in connection with her murder made their first appearance.

The three face charges of rape, murder, kidnapping, conspiracy to commit murder, defeating the ends of justice, possession of an unlicensed firearm and ammunition.

“The family is here to see the [alleged] killers of their daughter. We don’t want to entertain any speculation about their identities or whether they have links to the family. We’ll see them when they appear in court,” said family and EFF spokesperson Sinawo Tambo.

He said police investigations were continuing and the possibility of more arrests could not be ruled out.

@TimesLIVE Family and EFF spokesperson Sinawo Thambo says the family is here to see the suspects. He shares that police investigations continue and there's a possibility of more arrests #HillaryGardee pic.twitter.com/nUKIxFUtvM

As proceedings started, the state prosecutor informed the court the three accused had opted not to apply for bail.

They were named as Sipho Lawrence Mkhatshwa, Phillemon Lukhele and Albert Mduduzi Gama.

Lukhele’s attorney shared a message from the suspect: “My client wishes to convey his message of condolences to Mr Gardee and his family. We have known each other for a while.”

Lukhele said to show his commitment to assisting police with their investigation, he would not apply for bail to allow investigations to continue without obstructions.

All the accused asked for medical assistance, alleging they had been tortured by police during questioning and their arrest. They told the court they had sustained injuries and were in pain.

The state is awaiting DNA and ballistics reports, a post-mortem report and analysis of video footage.

Hillary’s brother Noble was emotional and cried while he waited to be let inside court.

A few ANC members were also standing outside court.

There was a strong police presence around the court and the street leading to the building was closed.

The three people, including the suspect arrested on Friday, will appear in the Mbombela magistrate’s court on Monday.
News
2 weeks ago