Hillary Gardee: What you need to know about the case and suspects charged with her murder 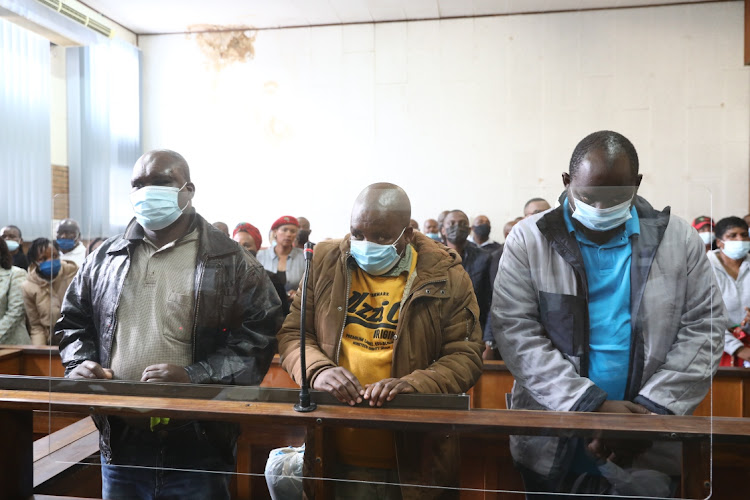 Sipho Mkhatshwa, Philemon Lukhele and Albert Gama appear in the Nelspruit magistrate's court in connection with the death of Hillary Gardee. They are charged with conspiracy to commit murder, kidnapping, rape, murder, hijacking and defeating the ends of justice.
Image: Thapelo Morebudi

The body of the 28-year-old daughter of former EFF secretary-general Godrich Gardee was found in a field near Mbombela, Mpumalanga, last Tuesday.

She was laid to rest on Saturday.

Here is what you need to know about her murder:

Lukhele is a senior manager in the office of ANC chief whip Fidel Mlombo in the Mpumalanga legislature. He also owns a guest house in Mbombela, where it is believed Hillary was killed.

According to the EFF, Lukhele asked to send condolences to the Gardee family, claiming to know the family personally.

One of the three men arrested in connection with Hillary Gardee's murder is a senior manager in the office of the ANC chief whip in the Mpumalanga ...
News
1 month ago

The state applied for the case to be postponed until June 9 to conduct further investigations.

All three suspects abandoned their bail application and will waive claims for bail to allow investigations to continue.

The trio were ordered back into police custody and will receive medical attention after claiming that they were tortured after their arrest at the weekend.

The possibility of there being more arrests has not been ruled out by police.

WATCH | 'Why my sister?': Hillary Gardee's brother speaks of pain and loss

Twenty-three-year-old Noble Gardee's wide shoulders deflate as he softly addresses the heartbreak he is suffering in the wake of the discovery of his ...
News
1 month ago

The motive for Hillary’s killing is unknown.However, speaking at her funeral, police minister Bheki Cele said her death could be politically, financially and criminally motivated.

“There’s been a question asked time and again by the media is it political? Is it criminal? And it does seem to be a combination of both. At this present moment, we have four men who chased this woman around. The one is going to court on Monday, we have three more men of interest,” he said.

Cele reiterated that no-one involved in Hillary’s murder would escape the law.

The family of murder victim Hillary Gardee said on Sunday they will allow the legal system to conduct its work as Hillary, the family and the people ...
News
1 month ago

The three people, including the suspect arrested on Friday, will appear in the Mbombela magistrate’s court on Monday.
News
1 month ago

Accused allege they were tortured by police.
News
1 month ago