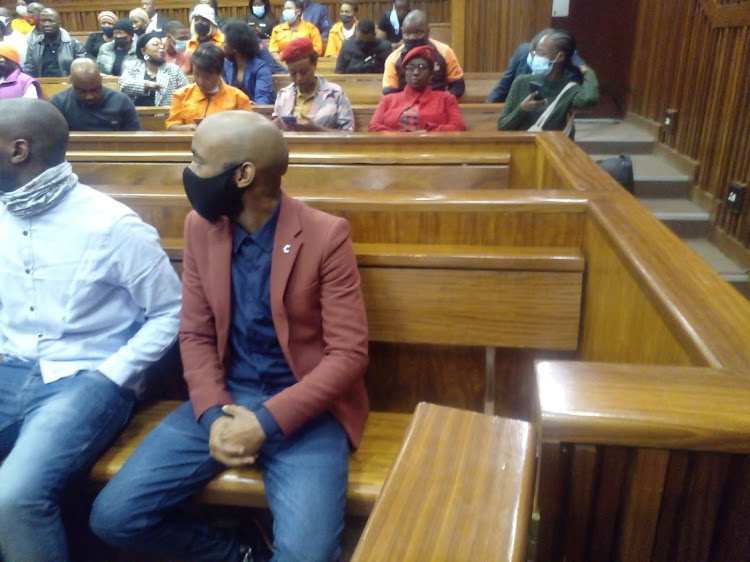 A delay in the filing of pre-sentencing reports has led to a postponement in the case of Ntuthuko Shoba, who was found guilty in March of murdering Tshegofatso Pule.

A calm-looking Shoba appeared briefly in the high court in Johannesburg on Tuesday morning.

Outside court, a small group of protesters demanded a lengthy prison sentence for the former JSE analyst.

Pule was eight months pregnant when she was found dead in June 2020, with a single gunshot wound, hanging from a tree in Durban Deep, Roodepoort, west of Johannesburg.

Shoba was caught after the hitman he hired, Muzikayise Malephane, was arrested. Malephane confessed to the crime and implicated Shoba as the mastermind, saying he had wanted Pule killed because he was afraid his fiancée would find out about his affair with Pule. Malephane pleaded guilty to the murder and is serving a 20-year sentence.

GBV Brigade is here at the High Court in Johannesburg singing as the sentencing proceedings are expecting to begin for Ntuthuko Shoba, who was convicted of the murder of Tshegofatso Pule. @TimesLIVE #Shoba #Pule #Tshegofatso pic.twitter.com/XFl3fKFIzc

NPA spokesperson Phindi Mjonondwane said the matter was postponed as Shoba opted to have a private probation officer.

“The accused had to be provided with the opportunity to prepare a report in mitigation of sentence,” she said.

“This is the first request for postponement after the conviction stage, so we don’t think it is unreasonable, but as the state we want to see the matter brought to finality.”

A Pule family spokesperson, Tumisang Katake, said: “I think in the interest of fairness we just have to allow it. Again we see a process whereby our family is being denied a chance of closure.

“We just have to give him a chance to conduct his pre-sentencing interviews and for the report to be compiled and hopefully [when the case resumes] we hit the ground running.”

Speaking outside the court, Katake said they needed the sentencing proceedings to be concluded so the family could get closure. “So that we all go back to mourn and make sure we reflect on the anguish and pain that this ordeal has caused us as a family,” he said.

The trial will resume on July 28.

Shoba sentencing for Pule's murder set to start on Tuesday

The sentencing proceedings of Ntuthuko Shoba, the man who was found guilty of murdering Tshegofatso Pule, are expected to begin in the high court in ...
News
3 months ago

Police minister Bheki Cele has joined the throng of people celebrating Ntuthuko Shoba's conviction on Friday for ordering the murder of his pregnant ...
News
4 months ago

South Africans have welcomed the guilty verdict against Ntuthuko Shoba for the premeditated murder of his pregnant girlfriend Tshegofatso Pule in ...
News
4 months ago