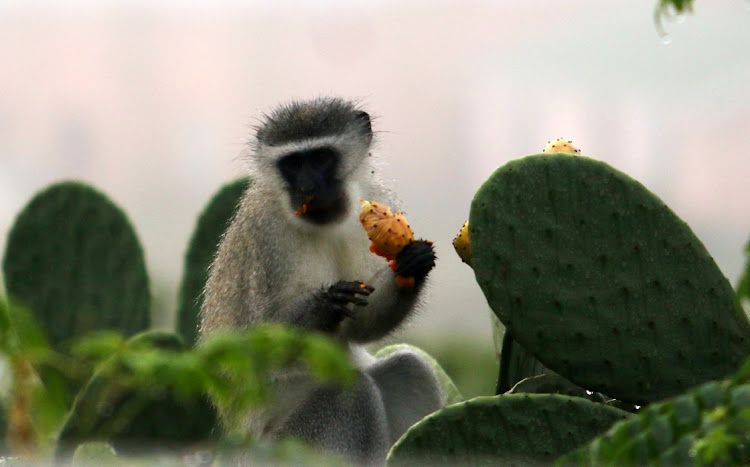 'Hi, if anyone is walking around Carlisle Crescent area and finds a phone, please could you contact me. We were robbed by a monkey ... yes, a monkey,' Julie Ribeiro posted on Facebook. File image.
Image: MICHAEL PINYANA

Durban supermarkets should be suspicious if they receive a bulk order for bananas via their phone shopping apps.

That's because a thieving monkey in the city has acquired a cellphone.

A Durban North woman on Wednesday asked members of a Facebook community group to be on the lookout for a missing phone.

“Hi, if anyone is walking around Carlisle Crescent area and finds a phone, please could you contact me. We were robbed by a monkey ... yes, a monkey,” Julie Ribeiro posted.

Ribeiro told TimesLIVE a monkey had “broken into” her father's vehicle and made off with his painter's phone and a container of chewing gum.

“My dad is doing some painting around our house in Durban North and when his painter went out to the van to get his phone, it was gone — as well as my dad's container of chewing gum. The van's windows were open, but it is behind gates as well as electric fencing and my husband had closed the kitchen door due to the troop of monkeys wanting to come into the kitchen.”

Ribeiro said her father and the owner of the phone walked around the neighbourhood looking for the missing device, but it was not found.

“The monkey must have dropped it as it was off. The painter was super upset. We are trying to arrange another phone for him.”

Ribeiro was surprised to discover what items monkeys take from homes.

“If you go into my post you will see other things that people have had taken.”

Some said monkeys had made off with plastic fruit, painkillers, pink fabric dye and an uncooked chicken.

One resident posted a photograph of a monkey in a tree opening a present it had stolen from under the Christmas tree on Christmas Day.

K9 Leah, the police dog who drowned during a flood search and rescue operation, was laid to rest in an emotional private funeral service on Wednesday.
News
1 week ago

Their raucous calls and constant pecking of lawns, it turns out, are not the worst crimes of the hadeda ibis - a creature dubbed “the Hannibal Lecter ...
News
2 weeks ago