WATCH | Would you propose to your girlfriend at her father's funeral? This SA man apparently did 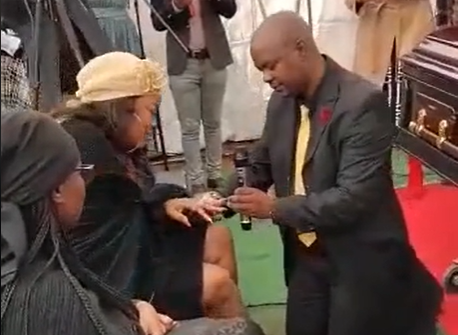 A video of a man apparently proposing to his bae at her father's funeral has gone viral.
Image: TikTok/ M.Mojela

A South African man has made international headlines for allegedly proposing to his girlfriend at her father's funeral.

The video was shared on TikTok by user M.Mojela earlier this month and has since gone viral.

In the video the man can be seen kneeling in front of a woman while she sobs near a coffin. He pulls out a ring as mourners gasp and puts it on her finger.

A caption to the video reads: “Proposing to the deceased's daughter right at the funeral. Wiping the tears there and then.”

According to The Daily Mail in the UK, the proposal took place in Limpopo. However, TimesLIVE has not been able to verify or get additional information about the incident. Any comment will be included once received.

The video sparked fierce debate, with many criticising the man and others joking that he was simply taking his shot.

“Could he not wait until the funeral was over?” added another.

One user defended the alleged proposal, saying: “It is telling father-in-law go and rest father, I promise I will be there to watch over and protect them as you did while you were alive. It is awkward, but I understand it.”

You thought now was the time to propose marriage to me? At my parent's funeral, you thought now would be the right time to get on a knee and present me with a ring?!?!?!?! I'd hit you over the head with one of the grave diggers' shovels, tf https://t.co/f06QQoOcUD

It speaks to his low self esteem. He wanted to catch her at her most vulnerable

This gogo is so shook 😭 🤣 pic.twitter.com/lQYYBQn5ux

Bathong he couldn’t have waited until di after tears 😵‍💫 pic.twitter.com/5DAJ4pu2op

He was trying to cheer her up. I would say yes honestly. As painful as death is, that man could have been pushed by God to do what he did.

this man had a plan and he stuck to it , turned a whole funeral into a celebration which super wild , couldnt even wait till they were in the ground smh

it's giving vibes of i`ll do it when she ain` thinking straight, wouldn` be surprised if she changes her mind later but anyway maybe we wrong, maybe he has his reasons & they genuine & considerate, somehow pic.twitter.com/GgxUAMxS5c

Just 10 days after a heart transplant gave him a second chance at life, Durban businessman Navern Munian caused his fiance's ticker to skip a beat ...
News
2 weeks ago

'We have love and we are in love with each other. We told ourselves that we will grow old together with or without money,' said Hector Mkansi, whose ...
News
5 months ago

'KFC couple' to jet off for dream honeymoon in New York

Nonhlanhla Soldaat and Hector Mkansi, fondly nicknamed the 'KFC Couple', are expected to go on an all-expenses-paid honeymoon to New York at the end ...
News
2 years ago