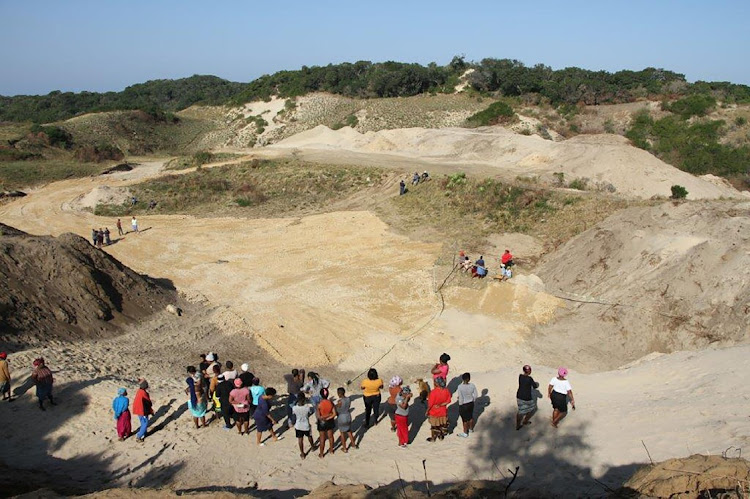 An illegal sand mining site in the township outside Gonubie. Agri SA says illegal mining by purported artisanal and small-scale miners in the Sand River basin, a tributary of the Limpopo River, has reached crisis levels for the agricultural sector in Limpopo.
Image: MFUNDO PILISO

Agri SA said it was writing to President Cyril Ramaphosa to request that all applications for mining permits and current mining activities be halted.

In a statement issued on Thursday, the organisation said it was concerned about the rapid proliferation of illegal and unregulated sand mining activities in the vicinity of the recently proclaimed Musina-Makhado special economic zone in Limpopo.

It said  illegal mining by purported artisanal and small-scale mining (ASM) miners in the Sand River basin, a tributary of the Limpopo River  — one of Southern Africa’s major water courses — has reached crisis levels for the agricultural sector in that province.

Five suspects have been arrested for allegedly being involved in illegal mining of sand near Maake, Limpopo.
News
5 months ago

“It appears that the mining companies involved and the environmental assessment practitioners acting on their behalf are seeking to circumvent environmental and water-use license authorisation requirements by applying for multiple mining permits for adjacent areas measuring less than 5ha each, but together comprising an extended area measuring roughly 70ha,” Agri SA said.

It said in many instances, public consultation has been non-existent.

Agri SA said this activity has serious implications for the environment, food production and proper management of water resources in the area.

It said the problem extended further than Limpopo, as similar activity was reported across SA. Current mining laws do not regulate ASM as a discrete form of mining. Agri SA said that on March 30, mineral resources and energy minister Gwede Mantashe published the ASM Policy which aims to create a formal ASM industry that can operate in a sustainable manner and contribute to the economy.  The policy also aims to deter illegal mining.

“But this task cannot be left to the department of minerals and energy alone, given the far-reaching consequences of this illegal activity for the environment, the agricultural sector, and the country’s already scarce water resources.”

Agri SA said the interministerial panel that Ramaphosa should convene should include ministers for minerals and energy, water and sanitation, forestry, fisheries and the environment, and agriculture, land reform and rural development, to ensure that the ASM policy is not abused to the detriment of the country’s natural resources.

“Current abuses must be curbed swiftly to ensure the future success and sustainability of both the agriculture and mining sectors, and to protect in the environment and water resources of the affected areas,” Agri SA said.

City of Tshwane, three others blamed for drowning of Mamelodi boys in quarry

The families of two children who drowned at a quarry at Skierlik Mountain View informal settlement last year will receive compensation.
News
1 week ago

Showdown on the wild West Coast as communities take on miners, prospectors

Activists say the ecology and the livelihoods of traditional fishers on the coast north of Cape Town are threatened by rampant and rapidly expanding ...
Opinion & Analysis
3 months ago

Illegal miners are not only causing huge damage to riverine ecosystems by stripping the rivers of sand, they are also sparking serious safety ...
News
9 years ago