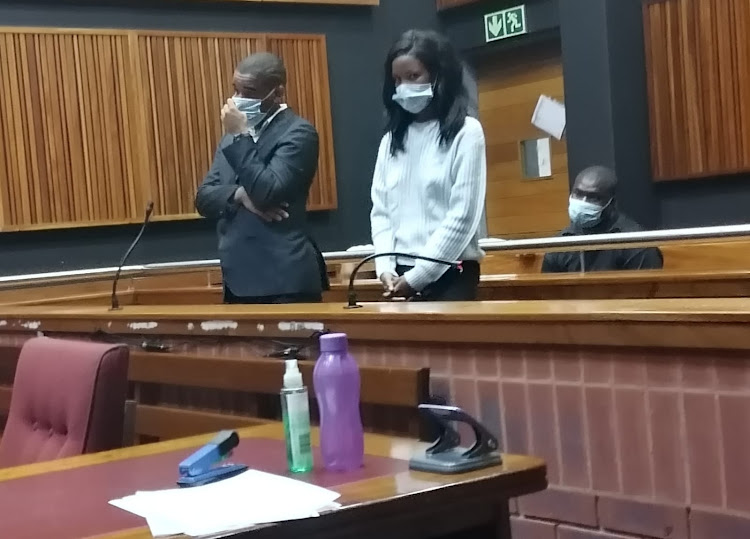 Athembile Mpani and Gershom Matomane in the Johannesburg specialised commercial crimes court in the Absa R103m fraud case in March. They were joined by two other suspects in the dock on Thursday.
Image: National Prosecuting Authority

A 24-year-old woman is set to appear in the Johannesburg specialised commercial crimes court sitting in Palm Ridge on Friday in connection with the R103m stolen from Absa between September and December 2021.

The woman is the sixth person to be arrested and charged for the crime and is alleged to be the lover of one of the accused, Gershom Matomane.

The Hawks revealed she was arrested on Thursday after Matomane and three others appeared in court.

The alleged mastermind in the crime, Xolela Masebeni, an IT specialist at Absa who allegedly syphoned funds out of bank accounts, was shot dead in the Eastern Cape in February. He was out on bail in connection with the matter.

Masebeni died, leaving his 20-year-old wife Athembile Mpani and Matomane to face the music. They were alleged to have received large sums of the stolen funds.

On Thursday two more accused were added to the case.

The Hawks claimed the duo was positively linked to the crime through bank transactions.

Nondlazi, 29, handed herself in to authorities, accompanied by her legal representative, on Wednesday while Ntombela was arrested by the Hawks in KwaZulu-Natal on Tuesday.

The pair join the other accused in the matter, with all facing charges of fraud, theft and money laundering.

After Thursday’s proceedings, Ntombela and Nondlazi were remanded in custody and their case was postponed to next Wednesday for their bail application.

Matomane and Mpani, who are out on bail, are expected back in court on June 30.

Absa IT specialist Xolela Masebeni, who allegedly fraudulently transferred R103m into six bank accounts over four months, was shot dead in the ...
News
2 months ago

The R103m worth of fraudulent transactions were uncovered by Absa’s forensic division, which reported the matter to the police.

The investigation revealed Masebeni accessed a corporate business account and transferred the funds. Masebeni was arrested by the Hawks in Komani on January 19 and appeared in the Queenstown magistrate’s court the next day.

At the time, the National Prosecuting Authority (NPA) said it had managed to recover R66m.

The Hawks said their investigations were continuing and more arrests could not be ruled out.

Matomane has a pending case in Bellville, Cape Town, for allegedly defrauding Capitec Bank, together with five accomplices, of R3.4m.

Another suspect is expected to appear in the R103m Absa fraud case, which resumes in the Johannesburg commercial crimes court on Thursday.
News
1 week ago

Absa IT specialist Xolela Masebeni, who allegedly fraudulently transferred R103m into six bank accounts over four months, was shot dead in the ...
News
2 months ago