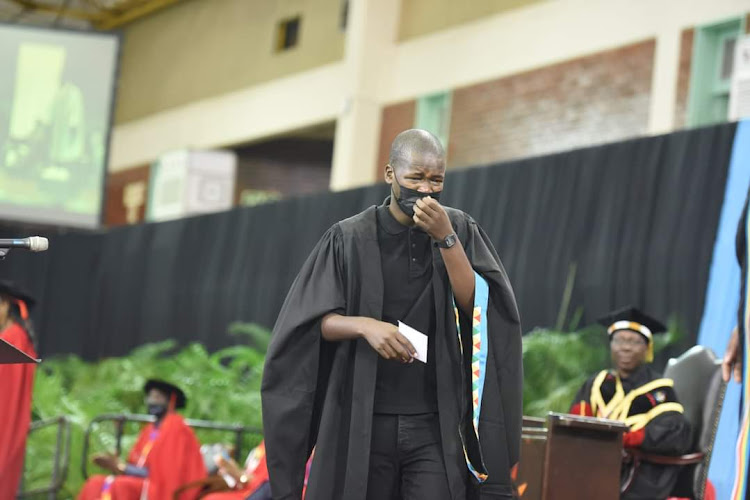 University of KwaZulu-Natal graduate Dumisani Ngobese broke down in tears when he graduated on Friday.
Image: Supplied

A 23-year-old graduate, whose tears on the graduates’ stage at the University of KwaZulu-Natal (UKZN) touched the hearts of South Africans, starts his new job on Monday.

Dumisani Ngobese was offered a job by Durban businessman Calvin Mathibeli shortly after his graduation photographs trended on social media.

The graduate, who could not afford a suit for the event, landed a job without applying.

Mathibeli was so moved by Ngobese’s story that he decided to create a permanent post for the young graduate and pay for his Honours’ degree.

Ngobese could not hold back the tears after being conferred with a Bachelor of Arts degree at a ceremony on Friday.

He was raised by his maternal grandmother in Bhukhanana, a rural area outside Empangeni.

“My grandmother was a street vendor and the sole breadwinner in the house where there were more than 10 children,” he said.

His grandmother was too ill to make the trip to Durban for the graduation, but his mother and aunt were there.

HAPPY ENDING FOR DUMISANI AS HE IS OFFERED PERMANENT EMPLOYMENT AND FUNDING FOR STUDIES Less than 24 hours after his...

Posted by University of KwaZulu-Natal on Saturday, May 14, 2022

Mathibeli said he was moved by Ngobese’s story because they shared similar backgrounds.

“I was also raised by my grandmother in a big family but our resilience has made us who we are. I want to ensure Ngobese is able to earn a living so he can contribute to his family. All I need from him is to respect the job.”

His group of companies has interests in agriculture and minerals and has 12 subsidiaries with offices in seven provinces and a presence in Namibia and Lesotho.

“I had other vacancies but I thought let me create one for Dumisani. He will start work on Monday. It will be a good position and a permanent one. He said he is studying online and we will pay for his studies”.

Ngobese told TimesLIVE he was overwhelmed with the response to his photographs, which went viral.

“I never expected this. I am shocked at how many people have been showing me love.”

Many UKZN graduates and their parents wear traditional Zulu attire and have maintained a reputation for delivering the best graduation content over ...
News
1 month ago

A chief harbour master who started as a taxi driver in Mamelodi, Pretoria, graduated with a postgraduate diploma in maritime studies at the ...
News
1 month ago