Ambulance stripped of engine, gearbox and tyres in Mpumalanga 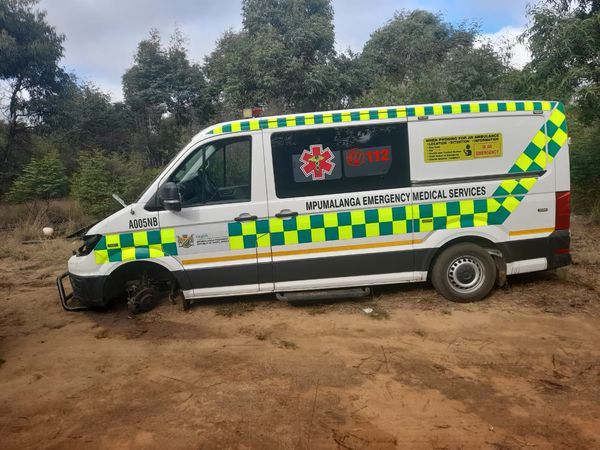 The value of the ambulance's vehicle parts stolen is estimated at R300,000.
Image: SAPS

Paramedics responding to a hoax call for help were held up by criminals in Mpumalanga, while their ambulance was stripped of its parts.

Police spokesperson Brig Selvy Mohlala said the provincial emergency medical services team had received a call about a pregnant woman who was in labour at a farm near Belfast on the Spitzkop road on Sunday night.

At about 9.30pm, a follow-up call was received by the paramedics. The caller asked the medical staff to meet at a spot where they would be given directions to the scene.

“Little did the medical staff know that this was an orchestrated robbery which was paraded as an emergency call.”

The EMS crew was accosted by two men wearing balaclavas which covered their faces. Their cellphones were taken from them before they were tied up with cable ties and kept inside the ambulance.

The ambulance was then driven to another place where five more suspects appeared.

Mohlala said the suspects stripped the vehicle of its gear box, engine, two tyres as well as the battery, which were loaded into another vehicle.

The total estimated value of the vehicle parts stolen is about R300,000.

The suspects gave the EMS personnel the cellphones taken earlier before they left the scene.

A search is under way for the suspects.

Provincial police commissioner Lt-Gen Semakaleng Daphney Manamela denounced the attack. “As law enforcement officers we will not allow a situation like this whereby emergency workers will be hindered to carry out their duties by criminals. We will do all in our powers to bring them to book.”

Anyone with information is asked to contact Capt Tobias Mogadime at 071 353 6763 or call the Crime Stop number at 08600 10111. All information will be treated as confidential and callers may opt to remain anonymous.

A motorist was shot dead during a robbery on the N4 highway outside Pretoria after he stopped to attend to a flat tyre.
News
3 months ago

Police arrested five suspects a few hours after an ATM was bombed in Carousel View in Tshwane on Friday.
News
3 months ago