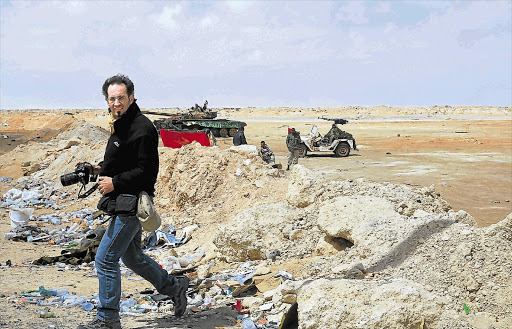 Anton Hammerl. His widow Penny Sukhraj-Hamerl is expected to speak at an event on Thursday about how SA has been silent on the search for his body. File photo.
Image: UNAI ARANZADI

May 19 2022 marks exactly 11 years since Anton Hammerl's wife Penny received the news that he had been shot dead, allegedly by Libyan forces on the Brega front line.

Penny Sukhraj-Hammerl said she was still holding on to the hope that she would one day get his remains back, especially because there had been instances where remains of others had been found.

“That gives a glimmer of hope that it is possible. To have the remains, to have the burial and ceremony. That would help a lot,” Sukhraj-Hammerl told TimesLIVE.

Besides his remains, Sukhraj-Hammerl said she was desperate for answers on what exactly happened to her husband.

“We want accountability and justice about what happened to Anton.”

She was speaking ahead of an event on Thursday evening titled “Justice for Anton” which was to be held in London where the couple had settled.

She is expected to speak about Hammerl's passport, which she received from a South African official in 2016. Sukhraj-Hammerl said she believed the passport had been in possession of the South  African government for a few years before it was handed to her.

She believed the passport was most likely in Hammerl's possession when he was killed and believed establishing where it was found would help in her search for his remains. He had used the passport to enter Libya.

Sukhraj-Hammerl said she had received little joy from the South African government as she tried to get details about how they came to be in possession of the passport.

She said senior officials who dealt with the family around the time of Hammerl’s death must have known about the passport — but did not return it to the family.

She said May 19 was usually a difficult day for her family.

“It is marked with deep sadness, it is marked with grief and trauma,” Sukhraj-Hammerl said. She recalled how there were feelings of absolute anguish that the family had for 44 days before the news came that he had been killed.

“That feeling is palpable around this time. It becomes amplified,” she said.

'Someone needs to answer for Anton Hammerl's death'

I let him go to cover a war, writes Penny Sukhraj-Hammerl, and now I need to find out why my husband never returned — and who was responsible for his ...
Opinion & Analysis
1 year ago

It’s 10 years since the photojournalist died, and no-one has been prosecuted and there has not even been a full probe
Opinion & Analysis
1 year ago