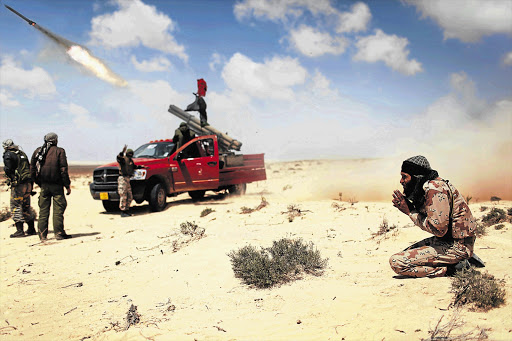 One of the last pictures taken by Anton Hammerl before he was shot by troops loyal to Muammar Gaddafi in Brega, Libya in 2011. His widowPenny Sukhraj-Hammerl wants the truth surrounding his killing.
Image: Anton Hammerl

The widow of SA-born photographer Anton Hammerl says she has battled to get assistance from the SA government to answer crucial questions about his death.

Hammerl was killed, allegedly by Muammar Gaddafi’s forces, in Libya in 2011.

Thursday marked 11 years since his wife Penny Sukhraj-Hammerl, received news of his death, and she held a media briefing in London where she exposed the SA government’s alleged non-willingness to assist her to get answers.

The biggest question which she believed would be key to find out where her husband died and where his remains lay, was how SA authorities came to be in possession of  Hammerl’s passport, which he had used to enter Libya.

Sukhraj-Hammerl said she received the passport in 2016, five years after her husband was killed.

She said Hummerl’s passport would have been on him when he was killed. She wanted to know why senior SA officials withheld for years the information that the government had his passport.

She also wants to know why there was no official record of the return of Hammerl’s passport to her in 2016.

When asked what would give her a sense of closure, Sukhraj-Hammerl said she wanted the truth.

“How they came to get hold of the passport. We want to know why they chose not to tell us about it. What information they had about his remains. That is what accountability and justice will look like to us,” she said.

Caoilfhionn Gallagher QC, a media freedom lawyer at Doughty Street Chambers who leads the international legal team for Sukhraj-Hammerl, said this case was about the fundamental failures to act by the SA and UK governments, which both purport to support freedom of expression.

She said following his death, both countries had not been forthcoming in assisting his widow.

Gallagher said the two key aims of Hammerl’s family are an investigation into his death, and to do everything they can to get his remains returned to the UK.

“Ultimately we would like to get prosecutions and convictions,” Gallagher said.

“We want accountability and justice about what happened to Anton.”
News
1 month ago

It’s 10 years since the photojournalist died, and no-one has been prosecuted and there has not even been a full probe
Opinion & Analysis
1 year ago

No closure for Anton Hammerl's family — 10 years after his death