At least one dead after KZN weekend floods 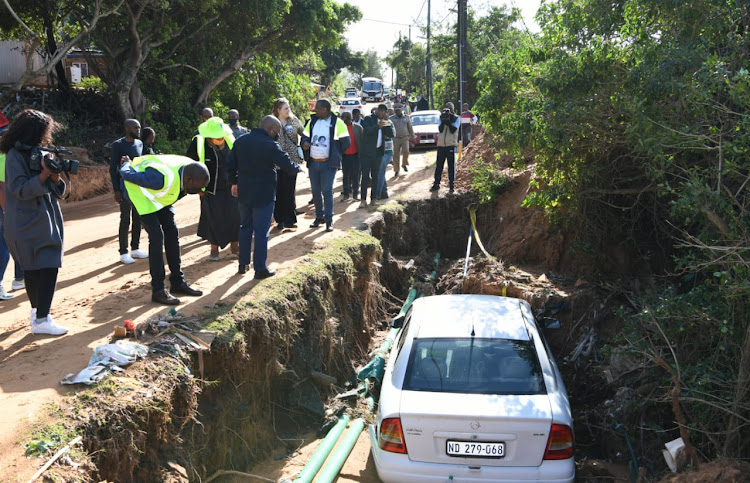 An in-loco inspection by KwaZulu-Natal premier Sihle Zikalala on Monday revealed some of the devastation of the weekend's rains which washed away roads and homes in parts of the province, including the north coast.
Image: Supplied

At least one body has been recovered after heavy rain hit KwaZulu-Natal for the second time in two months at the weekend.

The body was recovered in Inanda and the areas most affected by the floods were north and south of Durban.

“We are thankful that in these areas no-one was reported to have died. Though we have received one body at Phoenix mortuary which could be ascribed to these floods," said Zikalala.

He extended sympathy to residents in uMdloti where some homes were washed away and acknowledged that many people were still without homes from last month's floods.

“We know there are some people who are still living in temporary shelters. That’s why the department of human settlement is with us to ensure that those people are properly housed.”

Plans to build houses for the affected people are under way.

Major roads were damaged, including the M4 which was closed after the April floods.

“The road was severely affected between La Mercy and Seatide and it is impossible to use that road for today [Monday]. We are working to fill that hole or gap that was eroded and ensure that by the end of today or tomorrow [it] will be re opened,” said Zikalala.

The department of transport would handle the rehabilitation of the road.

They would also focus on the Umdloti/La Mercy bridge.

“The work to repair the bridge has started, but might take us another month to get it properly repaired.”

The provincial government has also identified a bridge between Tongaat and Zimbali which suffered structural damage but it was likely to take up to six months to fix.

Many property owners were affected in the Bluff, south of Durban.

“Fortunately, Toyota and other companies were left untouched. We [are] saying fortunately, because they sustained severe damaged [in the earlier flooding] which will cost huge money to repair,” said Zikalala.

He confirmed the rebuilding process would go ahead as initially planned, but there would be added responsibilities.

“We already have teams assessing the damage in each area. That will be incorporated in [a] report we have already compiled and submitted to the national government.”

Displaced by the KZN floods? Here’s the community halls you can go to for relief

Affected by the floods and need help? Here's where you can go.
News
1 month ago