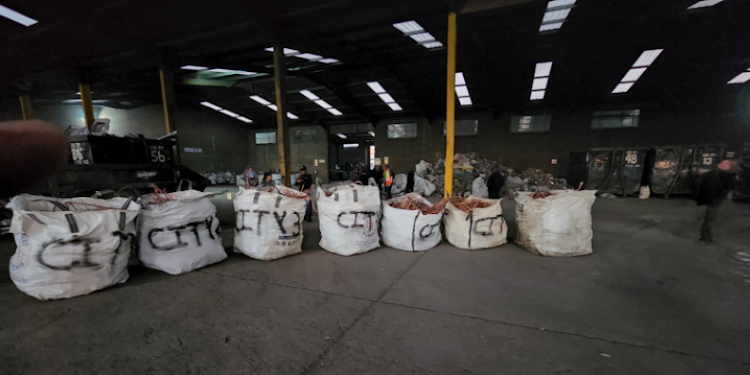 Seven bags of copper cables belonging to City Power were found at a scrapyard in Devland near Soweto recently. File Photo.
Image: Supplied

Gauteng is the biggest victim of essential infrastructure theft and vandalism.

This is according to Gauteng Hawks head Maj Ebrahim Kadwa.

Kadwa was speaking on the second day of the Joburg Energy Indaba which was undertaken by the municipality to persuade independent power producers (IPPs) to bolster their coal base load with cleaner and cheaper electricity.

The indaba comes at a time of rolling blackouts which threaten to cripple the country's biggest economic hub.

In his address on Tuesday, Kadwa said the insatiable demand for good copper was pushing up the price and therefore theft was increasing.

He said Gauteng was the main marketplace and hub for copper to be brought in, melted and exported.

“We have had several high-profile cases with fines dished out of about R7m, but this is of no consequence to syndicates [such is the enormity of their profits].

“Corruption and complicity are the stage four cancer of the country.

“We are now finding Eskom [energy] vending machines stolen ... Electricity to the tune of R600m was sold without Eskom or the energy sector getting the money — that’s just one syndicate.”

He said legitimate businesses were often used as a front for infrastructure crime and that stolen copper was mixed with legitimate copper and sold to the international market.

Kadwa said the use of microdot in infrastructure — to identify where the metal came from even if smelted — as well as drones used at night, were two plans the city was looking at to save its vulnerable infrastructure.

City Power on Thursday said it was pleased to have recovered scores of its stolen copper cables from a scrapyard in Devland, near Soweto.
News
3 months ago

On Monday, Johannesburg executive mayor Mpho Phalatse said R26bn was needed to help fix City Power’s infrastructure, but the entire capital budget is R7.7bn, which includes not only electricity but other infrastructure such as water and roads.

Environment and infrastructure services MMC Michael Sun added that load-shedding had cost the country between R60bn and R120bn across the country since it was implemented in February this year.

In Johannesburg, cable theft and infrastructure sabotage adds to the municipal woes.

In her closing speech, Phalatse said that to illustrate, the extent of the problem, City Power had recorded 1,770 cable theft and vandalism incidents in the current financial year.

This cost City Power close to R23m in direct losses.

“These figures exclude indirect losses such as revenue lost to unserved energy, and the greater economic losses of private customers and businesses.

The city is working with Crime Intelligence and the Hawks who are co-ordinating at a local level with the group forensic investigative service working with the Joburg metro police.

“The JMPD is at an advanced stage of forming a specialised patrol unit that will focus on economic infrastructure and illegal mining,” Phalatse said.