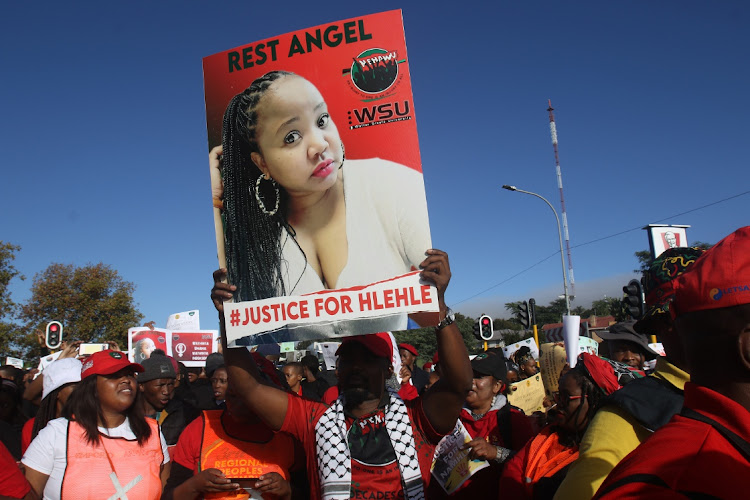 A GBV march for Namhla Mtwa in the streets of Mthatha where all political parties met and spoke in one voice against the killing of women.
Image: MICHAEL PINYANA

The visit follows concerns about service delivery and comes after Eastern Cape police commissioner Lt-Gen Nomthetheleli Mene ordered a manhunt for the murderer of Namhla Mtwa.

Mtwa was shot dead in her car when she arrive at her home in  Sidwadwa in April. The 35-year-old suffered multiple gunshot wounds to her upper body and was declared dead at the scene.

Her murder has caused national outrage after her sister, Sanga Nozintathu Mtwa, said that she had been in an abusive relationship with her partner of 17 years, and shared photos on social media showing the violence she allegedly endured during the relationship.

It was alleged that Namhla was killed as she tried to get out of the relationship.

Her sister turned to social media to call for justice for Namhla, saying no arrest had been made.

The office of the Eastern Cape provincial commissioner said a brigadier had since been appointed to oversee the case, ensuring there is a regular engagement between the detectives and family members of the deceased to provide constant feedback on the investigation.

The police ministry said the killing had again shone the spotlight on gender-based violence and femicide, crimes that remain a priority for the police.

Tina Joemat-Pettersson, chair of the parliamentary portfolio committee on police, said the murder  served as a reminder of the fear women live in every day.

“Our women are being viciously murdered at the hands of boyfriends, husbands and intimate partners,” she said during the presentation of the police budget vote in parliament.

Joemat-Pettersson called on Cele and Masemola to leave no stone unturned  in ensuring justice for Mtwa and all women murdered by intimate partners.

'The system is failing our people': EFF join calls for justice for Namhla Mtwa

The EFF says the pace of investigation into the murder case of Singwa Namhla Mtwa is an indication “the system is failing our people”.
News
2 months ago

‘We are not animals’ — Amanda Du-Pont joins #JusticeForNamhla calls

"She deserves justice. We are tired, scared and fearful. We speak for those who never make it out alive at the hands of GBV."
TshisaLIVE
2 months ago

Eastern Cape provincial police commissioner Lt-Gen Nomthetheleli Lilian Mene has announced that a senior manager has been appointed to oversee the ...
News
2 months ago