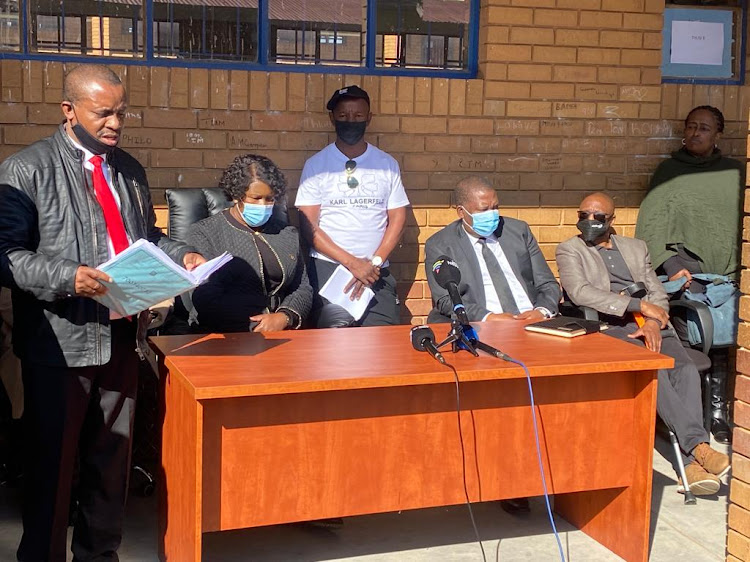 Gauteng’s Education MEC, Panyaza Lesufi on Friday visited the family and schools of three siblings who died after allegedly consuming an energy drink given by the father in the morning.
Image: Supplied

A man from Ratanda near Heidelberg in Gauteng who allegedly poisoned four of his five children, killing three of them, has reportedly said he has no idea what came over him.

The man is in hospital after he was found unconscious at their home shortly after his children collapsed and died at their schools on Thursday morning.

“There is a relative who went to see him at the hospital and she came back with a report saying they had been able to treat him and he is now speaking. She said he says he is extremely sorry, he has no idea what happened ... He says he has no idea what came over him,” said family spokesperson Johannes Khoabane.

He said the family was in pain after the tragic deaths of the three children.

Three siblings die in Gauteng school, another critical after drinking 'energy drink' allegedly given by dad

The deceased children are Lehlogonolo Khoabane, 16, and Katleho Khoabane, 13, who were both pupils at Khanya Lesedi Secondary where they died, and Tebogo Nqcongwane, aged six, who died at Ratanda Primary School. Neo Khoabane, 11, a pupil at the same primary school, is still in hospital in a critical condition.

Khoabane said: “We don't know what spirit possessed the father to take a decision to do what he did. He [allegedly] bought an energy drink and mixed it with [rat poison]. It's like he checked first for the mother to leave because he did this after she left for work.

“He took the energy drink and poured it for the children to drink, four of them.”

A fifth child, who survived the ordeal unharmed, had refused the drink, saying he was fine,

The Khoabane family said after the children had left for school, their father allegedly also gave the lethal drink to the family dog and attempted to take his own life.

The father of three children who died after consuming energy drinks he had allegedly given them on Thursday was found unconscious at their home in ...
News
1 month ago

“When the father saw the community outside, he took a decision to hurt himself. He wanted to kill himself. He wasn't able to. He drank pills, so many to overdose. He took a bottle and broke it, cut his throat. He stabbed himself on the hands, thighs trying to also kill himself,”  Khoabane alleged.

The children's mother was puzzled about what have could have led to the tragic incident.

Khoabane explained how the boys' teachers tried to save their lives when they collapsed at their schools on Thursday.

“All the teachers tried to help the children, even the ambulance arrived and tried to help, but there was no help they could offer.”

Lesufi has expressed his “hurt” over the tragic event.

“Death has once more visited us. There is no week that passes without us having to go to a family to pass our condolences. It has been a difficult period as a department,  we have been losing our children and visiting families which is the most difficult thing to do when families leave their children with us,” he said.

Lesufi said professionals will continue to monitor the situation at the schools and continue to provide the necessary assistance.

“I was hurt and I remain hurt and I think I will remain like this for quite some time. To lose three children at the same time is not easy, worse if they come from the same family.”

Police on Thursday said the father, who had been taken to hospital under police guard, would face murder and attempted murder charges. .

Tragedy amid neglect our mothers have to endure

To say the case of Zinhle Maditla — the mother who murdered her four children by feeding them rat poison —  has shocked South Africans would be an ...
Opinion & Analysis
2 years ago

For five days, Witbank murder mom Zinhle Maditla slept in the same room as her four dead children — whom she’d poisoned after a lovers’ quarrel — ...
News
2 years ago

Four life sentences for Witbank mom who poisoned her children

Witbank mother Zinhle Maditla was on Friday sentenced to four life terms for feeding rat poison to her four children, aged between 11 months and ...
News
2 years ago