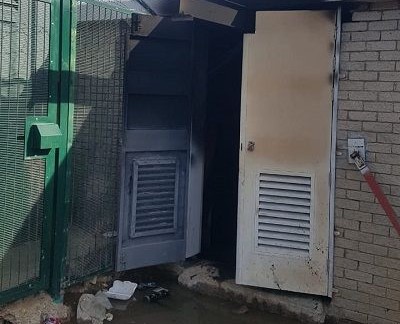 The sewer pumping station in Wallacedene, Cape Town, that was torched on May 7 2022.
Image: Supplied

Mayoral committee member for water and sanitation Zahid Badroodien revealed this week the city has spent R36m so far this financial year to upgrade and repair vandalised pump stations.

Badroodien said the theft of water and sanitation equipment resulted in sewage spillages and pollution of waterways.

The city has now joined hands with the water and sanitation department to fight the scourge.

A journey from Bellville to Cape Town illustrates how far Metrorail still has to go to get the service running smoothly again.
Opinion & Analysis
3 months ago

Badroodien and the department’s communications manager, Malusi Rayi, launched an awareness campaign on Friday about the impact of theft and vandalism of water and sanitation infrastructure.

Badroodien and Rayi visited the Fisantekraal sewer pump station, where cables were stolen. The facility is operating on a generator until repairs are completed.

“The water and sanitation directorate welcomes all efforts from partners and community members to help support our mission to clamp down on the theft and vandalism scourge of critical infrastructure so our communities can live, work and play in clean, healthy, safe spaces,” said Badroodien.

Covid-19 supplies stolen at Western Cape schools over the holidays

The Western Cape education department recorded 41 burglary and vandalism incidents at schools during the December holidays.
News
5 months ago

“This infrastructure includes our pump stations that are an important part of conveying sewage from homes to wastewater treatment plants and manhole covers that should only be opened by staff when they inspect the network or have to unblock the pipeline.

“The ongoing theft and vandalism of our critical water and sanitation infrastructure is a pain for our residents and is costing the city millions of rand. The Wallacedene pump station that was set alight is the most recent example.

“Such inconsiderate actions by a few culprits have a knock-on effect on many households which are negatively impacted when sewage runs in the street and stormwater and waterways are polluted.”

Badroodien said people who steal equipment are “essentially stealing from our residents”.

“It costs a lot to replace and repair, and the money could have been used for other services. These actions inconvenience the community and create safety hazards like open manholes and health risks when sewage runs in the street.”

The City of Cape Town’s metal theft unit made 132 arrests during the first six months of the current financial year.
News
3 months ago

Rayi said his department condemned the vandalism. “We appeal to anyone with information to report this to the law enforcement agencies.

“We need to create an environment where communities take ownership of the water, sanitation and other state infrastructure as it is there to serve them. By that, they will be able to safeguard it and report any forms of vandalism.”

‘I derive my political will to fight crime from seeing dead bodies as a child,’ says Albert Fritz's replacement

Reagen Allen grew up surrounded by crime and gangsterism in Mitchells Plain, Cape Town and joined hands with his neighbours to rid the community of ...
Opinion & Analysis
1 month ago

A police dog apprehended a suspect after cable theft affected the power supply at the airport in Gqeberha on Thursday.
News
4 months ago