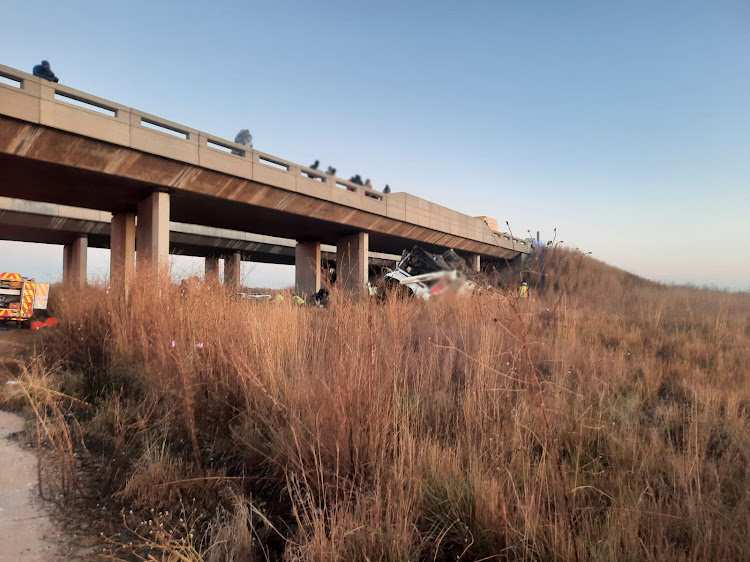 Six people were killed and about 60 others injured when a bus they were travelling in crashed off a bridge on the N3 highway in Heidelberg on Sunday.

The accident happened near the N3 Die Hoek Toll Plaza in Gauteng.

ER24 and Gauteng fire and emergency medical services responded to the accident. The bus was found lying on its roof on the side of the road.

ER24 spokesperson Russel Meiring said a number of the passengers had already climbed out of the crushed bus and were seated near the vehicle, while several others still lay trapped inside.

Additional medical resources were called to the scene, including several medical helicopters to help assess, treat and transport the patients to nearby hospitals.

Meiring said rescue and fire services were attempting to free passengers still trapped inside the bus.

“Medics treated the patients and provided the critically injured with advanced life support before they were transported to nearby hospitals for further care. Emergencies Services are still on the scene, tending to and treating the patients.”

He said the exact details surrounding the accident were unknown, but local authorities were on the scene for further investigations.

A toddler was killed and two men critically injured when a bus carrying a rugby team, staff, supporters and family members crashed down an embankment ...
News
1 month ago

Seven of the injured are in critical condition and two are seriously injured, according to early reports from emergency services that attended the ...
News
1 month ago