'It was a difficult, emotional day': Malema testifies in assault trial 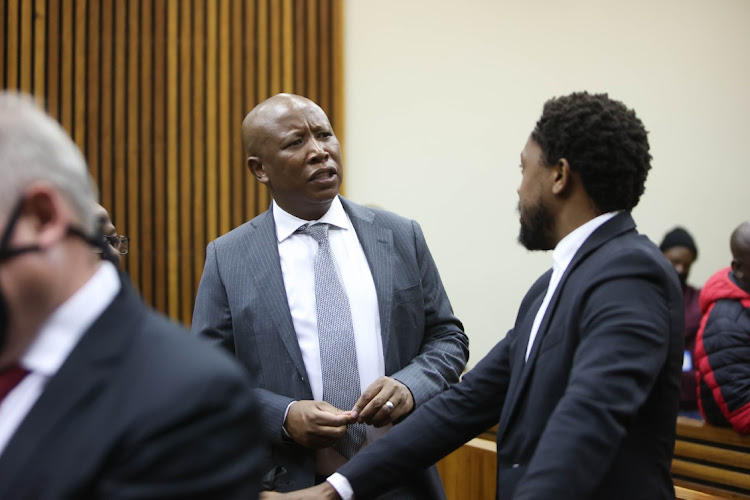 EFF leader Julius Malema and MP Mbuyiseni Ndlozi’s assault trial has been postponed until next month.

Malema wrapped up his testimony at the Randburg magistrate’s court on Friday.

Magistrate Lieland Poonsamy had earlier ruled that what was seen on CCTV footage was  prima facie proof of an assault on Lt-Col Johannes Jacobus Venter.

Advocate Laurence Hodes SC, on behalf of the accused, brought a section 174 application arguing the state did not have sufficient evidence for a conviction.

However, the magistrate found the state had submitted sufficient evidence for its case and took the CCTV footage into account.

“Mr Venter's evidence is also clear that he maintained that he was assaulted,” said Poonsamy.

The section 174 application was dismissed.

Hodes then said his clients were ready to testify.

Malema started his testimony after a short adjournment by saying the day in question had been a trying one for him.

“It was a very difficult day, a very emotional day. I came into politics when I was very young and I was raised by people like Winnie Madikizela-Mandela. I was very close to her and I couldn't imagine I was going to be stopped from burying her,” he said.

Hodes played a video in court that was submitted as evidence. Malema said the full video could have painted a picture of the entire incident.

“If the video started earlier and ran longer — I do not understand this thing of bringing this thing of cut and paste, this is not a total picture. It is a portion and not the full video. That's extreme distortion,” he said.

When the state prosecutor Mitchelle Hart asked Malema if he was aware that Lt-Col Venter's job description on the day was to be in charge of the gate, he did not dispute that.

Malema and Ndlozi are charged with assaulting the police officer at the funeral of Winnie Madikizela-Mandela in April 2018.

The trial will resume on July 1.

EFF leader Julius Malema has threatened to release a video of President Cyril Ramaphosa’s burglary after his appearance in assault case at the ...
News
2 months ago