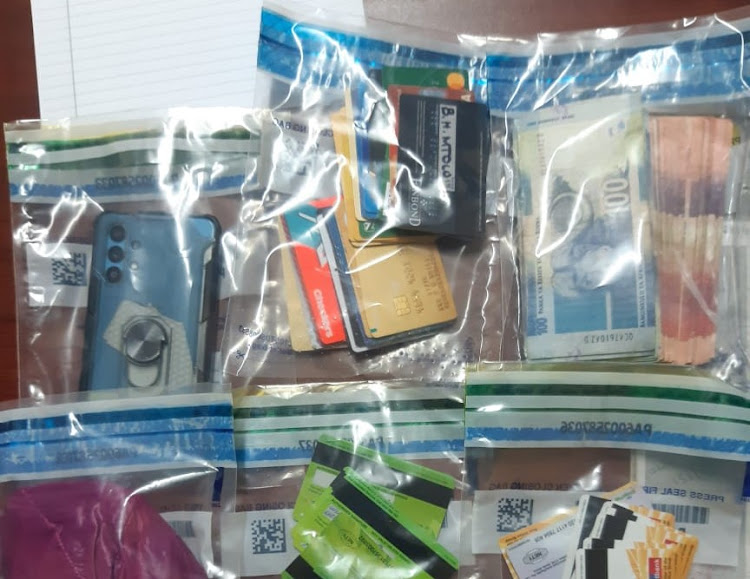 Some of the cards and cash seized from three suspects arrested at an ATM in Umkomaas, KwaZulu-Natal, on June 3 2022.
Image: SA Police Service

Two women and a man were arrested on Friday in Umkomaas on the KwaZulu-Natal south coast after being found with 50 Sassa cards, 20 EasyPay cards and R34,000 in cash.

The suspects, aged between 25 and 45, had allegedly transferred R360,000 into a private bank account, said police spokesperson Lt-Col Nqobile Gwala.

Gwala said the trio were arrested for possession of stolen property and more charges were expected to be added.

“On Friday at 8.20am, a security official observed suspicious activity at an ATM in Roseneath, Umkomaas,” she said.

“Two ladies and a man were observed acting suspiciously at the ATM and the official decided to join the queue to monitor them. The suspects were observed with numerous Sassa cards and bank cards that they were using to withdraw cash.”

Gwala said the suspects fled in their vehicle after realising they were being observed.

“The suspects were spotted withdrawing and transferring money at the ATM. As they returned to their vehicle, police were waiting for them.”

The trio are expected to appear in the Scottburgh magistrate's court on Monday.

Reapplied for the R350 grant? Here's when you could get your money

"More than one payment may be made in a month, but no-one will receive double payments," said Sassa.
News
2 months ago

Applying for the R350 grant? Website will be unavailable on these days due to system maintenance

Sassa said the SRD website will temporarily be offline for some "downtown" from Friday through to late June.
News
2 months ago

Sassa spokesperson Paseka Letsatsi acknowledged that the change may cause difficulties but advised affected clients to use other ways to access their ...
News
2 months ago