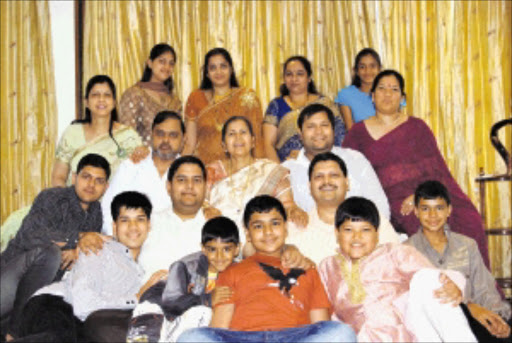 The seizure of luxury properties used by the Gupta family, accused of playing a key role in state capture, have thrust the controversial family firmly back under the spotlight.

The family wielded significant political influence during the years that Jacob Zuma was president of SA, infamously landing a commercial jet full of wedding guests at Waterkloof Air Force Base.

But this was in stark contrast to their humble beginnings. In 2011 the Sunday Times sent a reporter to Saharanpur in India to trace those humble origins. This is what he discovered ...

A stray dog scavenges for food in a dark passage leading to a nondescript apartment block in Rani Bazar, Saharanpur — a dusty, fly-infested city in northern India, nearly 200km from Delhi.

Several window frames are in dire need of a coat of varnish. Old towels and two saris are draped over a wrought-iron balustrade.

In South Africa there is growing concern about the Guptas' cosy relationship with President Jacob Zuma — but in Saharanpur, locals sing the praises of a "hard-working" family and their dad, Shiv Kumar Gupta.

The family's patriarch, who died in 1994, and his wife, Angoori, 61, lived in the building in Rani Bazar with their three sons, a daughter, Achla, 44, and various relatives.

The brothers' uncle, Amarnath, 75, who is bedridden, and his wife, Sumitra, 74, still live in a modest flat in the building, which is owned by the Guptas. Amarnath's widowed daughter-in-law, Beena Gupta, 50, occupies a four-bedroom flat in the same building, with her three children.

They lived in relative obscurity in Saharanpur, where Shiv Kumar was among a handful of locals to own a car.

One of his businesses, Gupta and Company, specialised in distributing soapstone powder, a key ingredient in talcum powder.

And he ran five "co-operative" stores, earning commission on the sale of oil, rice, wheat flour and cornmeal to locals who qualified for government ration cards.

In an interview with the Sunday Times, Atul, the brain behind Sahara Computers in South Africa, said: "We are never shy of our background. I am proud of it. We come from families that do not show or expose their business to others. It is considered showing off."

Their home in India contrasts with the brothers' lifestyle in South Africa, where they shuttle between a R52-million compound in Johannesburg and Mark Thatcher's former house in Cape Town, which was advertised for sale for R24.5-million. Family members are escorted by bodyguards; use a helicopter and three fixed-wing aircraft; have nine pilots at their beck and call and enjoy the services of five personal chefs.

Atul said they considered themselves "fortunate that we have never had to think about money since being born".

For years, and despite the Gupta family's growing wealth, Atul's father cycled daily to the Lord Shiva temple in Bada Baba Lal Dass, where he fed bread to sacred cows and stray dogs.

Shiv Kumar was known for his generosity to the poor, often dishing out thousands of meals to the needy.

Now the Gupta's flat in Rani Bazar stands empty: when the three brothers visit Saharanpur, they stay with their sister in a wealthy suburb.

Beena said of the family: "I am very proud of Ajay. He's the king of Saharanpur and he's our God. He's like a Bollywood celebrity here."

The contrast between the brothers' childhoods and their lives now are startling. Their children in Johannesburg are chauffeured to top private schools; their fathers were taken to primary school in a rickshaw.

However, when the trio went to secondary schools in India, they were accompanied by an armed guard.

Atul said: "We had no threats. It was just a precaution. As a family we generally try to be security conscious. We were born like that."

They remain that way today: the Guptas' compound in Saxonwold is monitored by closed-circuit surveillance cameras.

When he finished school, the eldest brother, Ajay, completed a BCom at the JV Jain Degree College. Atul and Rajesh obtained bachelors' degrees in science from the same institution. 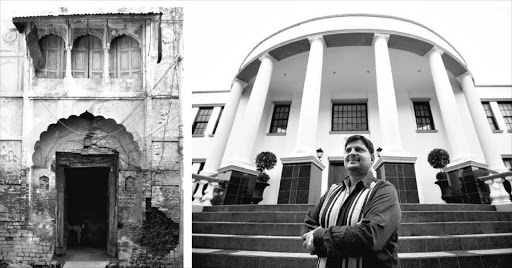 THEN AND NOW: The block of flats in Rani Bazar, Saharanpur, where the Guptas grew up. On the right, Atul Gupta at his home in Johannesburg
Image: PREGA GOVENDER and KEVIN SUTHERLAND

After graduating, all three brothers commuted between Saharanpur and Delhi for about four years to look after SKG Marketing, and settled in India's governing and commercial centre in the late '80s.

During this time Atul completed courses on assembling, repairing and maintaining Apple hardware, and became a computer supervisor at a printing company in Delhi.

Around this time the family sent Atul to China to investigate businesses there. Had it worked out, the Guptas would probably never have set foot in South Africa.

Said Atul: "Ajay wanted to ... (but) we didn't have much option to invest in China because they only wanted us to buy between 5% and 12% (shares) in the factory, while Ajay wanted management control."

In 1993 Atul was sent to South Africa by Shiv Kumar, who believed "Africa would become the America of the world".

Atul said his elder brother "was a genius, an out-of-the-box thinker". Ajay and his father "strategised" every day. "My dad and he were the same."

In 1994, the Gupta family transferred R1.2-million into an account Atul had opened in South Africa. With this money, as well as other "double-digit millions" that the family later transferred, he opened Correct Marketing in 1994, an import and distribution business selling computers and components.

Around the same time he also tried to set up a chain selling shoes imported from India, but struggled to get customers to pay. In about 1996 he sold Liberty Da Trend, the boutique he owned in Johannesburg's Killarney Mall.

"I didn't come with money. As and when I requested money, my family transferred the money," Atul said.

From a modest turnover of R1.4-million in 1994, Correct Marketing's sales rocketed to about R97-million in 1997 — the year its name changed to Sahara Computers.

Sahara Holdings, the parent company of the various Gupta businesses, has an annual turnover of more than R2-billion, and the businesses employ about 10,000 people.

Atul said he was "amazed": setting up shop in South Africa was relatively easy "because we didn't find any red tape ...".

Meanwhile, in Delhi in the early '90s, Ajay was studying to become a chartered accountant, and from 1995, he began visiting South Africa.

Rajesh, who, according to Atul is a "very close friend" and business partner of Zuma's son, Duduzane, joined the Gupta businesses here in 1997.

The two younger Gupta brothers and their families have become South African citizens. Ajay, who came to the country permanently in 2003, and their mother, Angoori, hold Indian passports.

The Guptas have kept their links with Saharanpur, taking the South African cricket team to the city in 2005.

Javed Sabri, the bureau chief of a local newspaper, said: "The stadium was packed that day as people came to see the South Africans."

"Ajay has made a huge contribution to the South African economy and we are very proud of him."

Those in Saharanpur who knew the Guptas, from politicians to lecturers and schoolmates, referred to Ajay as a "Bollywood star", "a genius", "clean-hearted", "sweet-natured" and a supporter of the poor.

"He made me sit in his chair and then told me, with tears in his eyes, that he was where he was today because of the time he spent at the ashram."

Ajay also helped 60 girls from poor families in Saharanpur to marry by donating furniture and household goods to them. He built an old-age home and distributes fruit from Gupta orchards to the poor.

The Guptas believe in the extended family system, preferring to live with their mother in Johannesburg. The Saxonwold compound consists of four mansions.

The main house boasts a grand piano in the hallway, and a large photograph of Shiv Kumar hangs from a wall in the lounge. There is a cricket pitch and swimming pool amid the manicured gardens and lawns.

Matriarch Angoori loves playing cards with her children on Sundays.

"Ajay can cancel any meeting in his life when he and his mother are playing cards," said Atul.

The three brothers don't smoke or take alcohol. Their wives, Shivani, Chetali and Arti, still enjoy cooking, despite having the chefs on the staff.

The brothers and their sister also honoured their father's wish that they each have only two children: the four siblings have produced six sons and two daughters.

Sister Achla's son, Varun, who completed a degree in electrical and electronics engineering at the University of Johannesburg, is a trainee at Shiva Uranium — a company in which the family has shares.

Achla's daughter, Vega, obtained a BCom from the same university.

Ajay's son, Kamal Kant, is in his first year of a BCom degree, and the other five Gupta children are still at school.

The family has close ties with the who's who of Bollywood, including Shahrukh Khan who, together with his son, Aryan, played cricket with the Gupta children in their backyard.

Anil Kapoor, one of the stars of the film Slumdog Millionaire, stays with the Guptas whenever he's in South Africa.

Recently the family hosted a Twenty20 cricket match between South Africa and India at Durban's Moses Mabhida Stadium as well as a concert to launch their controversial newspaper.

The Guptas also hold the naming rights to the Newlands and Kingsmead stadiums and count among their friends Indian cricketer Sachin Tendulkar.

But it is their cosy relationship with Zuma and his family that has fuelled unease over the power the Guptas appear to wield in local business circles.

Atul confirmed that South Africa's president had attended a Diwali function at their home in October.

"He goes and sits next to my family at the temple. This Diwali he did that."

But, he said: "Please tell us about any unfair business practice or any benefit which the Gupta family had because of Zuma. We have never taken (any benefit) and we will never take (any)."

He said they also enjoyed good relations with opposition politicians. "Tell me if there's anything wrong in it? We came to this country by choice and we believe that this is the right country for the Gupta family."