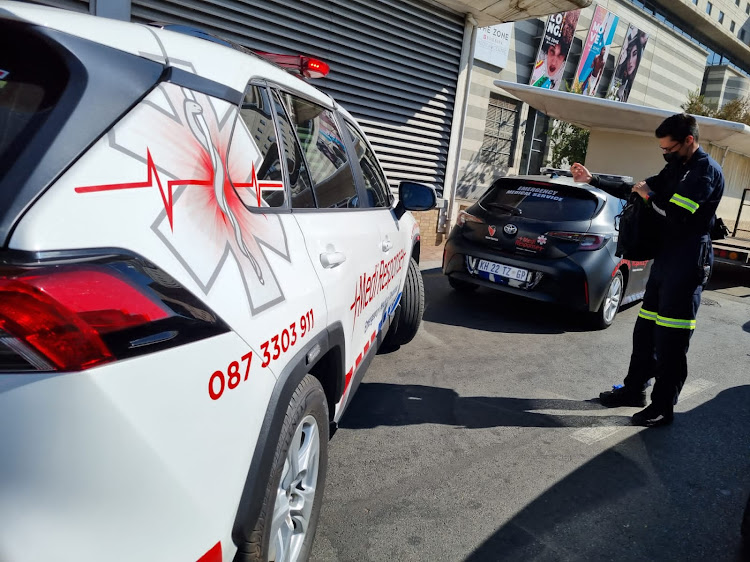 Medi Response paramedics in Rosebank after a man was shot dead on Thursday.
Image: Medi Response

Police are investigating a fatal shooting at a popular restaurant in Rosebank, Johannesburg, on Thursday morning.

Details are scant at this stage but Medi Response advanced life support paramedics who responded said a 42-year-old man was declared dead on the scene.

According to Paul Herbst from Medi Response, the man was having breakfast at Tashas restaurant outside The Zone mall when he was accosted by two men.

He was shot twice in the head before the perpetrators fled on foot.

Police spokesperson Col Dimakatso Sello said a search is under way for the culprits.

“According to reports, the Asian man was sitting with two men at a restaurant when two men wearing masks entered the restaurant and went straight to the victim and  shot him multiple times before fleeing the scene.

“The motive for the murder is unknown at this stage.

“A case of murder will be investigated. The police appeal to anyone who may have information that can assist with the investigation to contact the Crime Stop Line at 08600 10111 or anonymously report tip-offs on MySAPS app. All information received will be treated as strictly confidential,” said Sello.

A student teacher was shot in the head at a school in Newlands West in Durban on Tuesday.
News
2 months ago

Alleged underworld figure Nafiz Modack and five co-accused made their first appearance in court on Wednesday in connection with the fatal shooting of ...
News
2 months ago

A family celebrating their son's 10th birthday on Sunday evening could have been shot if they had left a restaurant five seconds earlier.
News
2 months ago

Police have rescued a businessman snatched at his workplace in Hercules, Pretoria, on Saturday.
News
2 months ago

A Gauteng man linked to eight cases, including the murder of a police officer in October 2021, was killed in a shoot-out with police in KwaZulu-Natal ...
News
2 months ago

This comes as unsigned messages and posters are circulating on social media platforms calling for a shutdown, partly in protest against the high fuel ...
News
2 months ago