'It was hell,' says mother of surviving Tshwane crash victim who was among first on scene 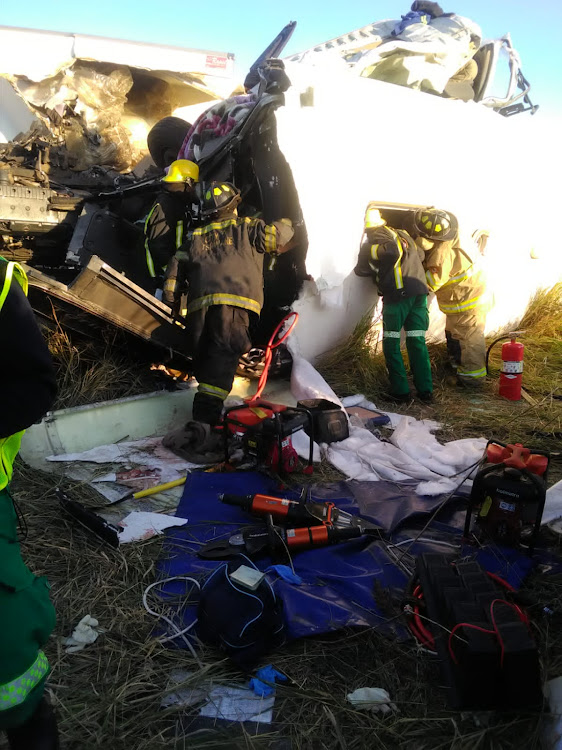 The mother of one of the surviving victims of the horrific head-on collision between a bus and a truck in Tshwane that claimed 15 lives and left 37 injured on Friday described the scene as “hell”.

Francina Kgomo, together with others who were the first to arrive at the crash scene on the M17 near Bundu Inn, described how they had to pull bodies out of the bus as they tried to save surviving commuters.

“It was hell, my son was underneath and the bodies were on top,” she said.

Tshwane emergency services spokesperson Thabo Mabaso said of the 15 deceased, 10 were women and five were men.

Mabaso said personnel arrived at the scene to find a bus and truck had collided head-on, with some patients trapped inside both vehicles.

Paramedics declared 15 people dead on the scene, while 37 were transported to the Dr George Mukhari, Steve Biko Academic and Kalafong hospitals.

Kgomo, who was speaking outside the Dr George Mukhari hospital on Friday, said the doctors told her that her son, Keabetswe Chira, 27, had broken legs and arms.

The last time she saw her son was in the morning when they changed buses as they usually do every day, she taking the bus to Midrand while he took the one to Centurion.

Kgomo and Chira first take one bus from Mothutlung in Brits, before taking different buses along the route.

“When our Midrand bus was approaching from behind, I realised that I knew the bus (involved  in the accident) and asked to get off.”

Kgomo said the people on the other bus were the first ones to arrive and tried to remove all those who were still alive and were able to walk.

“You should have seen me getting off the Midrand bus. I was saying 'my son'. But truly with the mercy of God, God has done a miracle for me.

“When I was screaming for him he said: ‘Mom help me.’ But he couldn’t move, there were bodies on top and he was underneath, until we called the ambulance, though they took time but I thank God for his life,” she said.

Kgomo said it was a miracle her son survived.

She said she was still traumatised by the horrific scene.

“When I keep quiet that thing comes back to me because we were the first — we broke the window on top to save people from outside.

“When we were seeing bodies, you start wondering where your son is because he was sitting in front. That seat covered him and he was underneath, covered,” she said.

Chira, who was heavily medicated to minimise the pain, was in a bed in the hospital's casualty ward, covered by a sheet.

“I am hurt on my hands and my legs, both of them. The pain is very bad. At least there is hope,” Chira  said.

He said he doesn’t remember much as he usually sleeps on the bus.

His brother, Gontse Chira, said he found out about the accident through Facebook and called his mother.

“She couldn’t say anything, the only thing she could do was to cry and call out my brother’s name. I rushed to the scene and a friend of mine rushed me from Mothutlung, North West . I was praying to God to just keep him,” Gontse said.

He said when he arrived at the scene, his brother was being removed from underneath the bus.

“Having been at that scene was horrific. I don’t think anyone would outlive that experience,” he said.

Gauteng public transport and road infrastructure MEC Jacob Mamabolo said the total number of people affected by the accident was 57.

“We also wish a speedy recovery to the people who are in the hospital and convey the message of support to the families,” he said.

The Road Traffic Management Corporation said it is investigating the cause of the crash.

Fifteen people have died and 37 have been injured in a crash involving a truck and a bus on the M17 in Patryshoek, near the Bundu Inn resort in ...
News
2 months ago

Six people have died in a crash involving a truck and a bus at the M17 Hornsnek Road near Bundu Inn, near Tshwane.
News
2 months ago

Car drives into a crowd in Berlin, one dead

A car drove into a crowd of people in western Berlin on Wednesday, killing one person, mass-selling daily Bild reported.
News
2 months ago