Suspects or witnesses? — Defence wants answers on the status of Kelly Khumalo and others in Meyiwa case 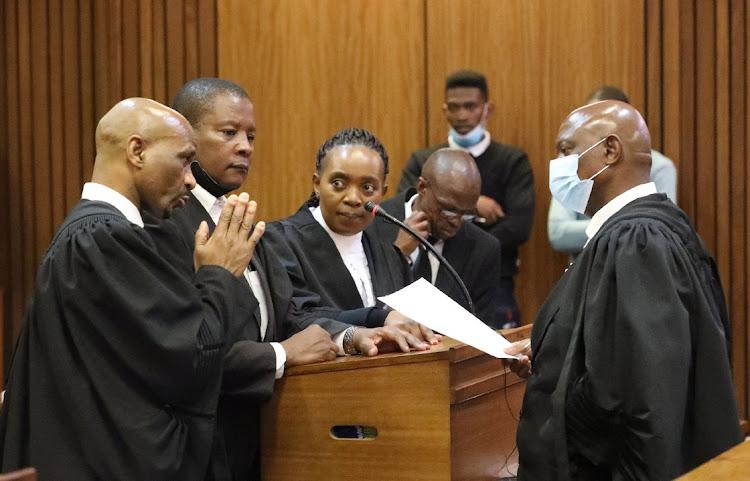 Defence counsels for the accused in the Senzo Meyiwa murder trial on Tuesday told the high court in Pretoria they want the director of public prosecutions to clarify the status of musician Kelly Khumalo and the other people mentioned in a second docket regarding the case.

Advocate Zandile Mshololo for accused 5 sought clarity on whether  Khumalo and the people who were in the Vosloorus, Ekurhuleni, house on the day Meyiwa, a former Bafana Bafana and Orlando Pirates goalkeeper, was shot dead, are “suspect-witnesses or accused-witnesses”.

“I am asking for an order directing the DPP South Gauteng to give clarity since exhibit C1 refers to a junior who has made an opinion. The DPP South Gauteng, as the head of the office, must give clarity on the decisions, if there are any that have been made under the docket cas 375/01/209. I see that if it's referring to the junior, it means there is someone superior who has to make the final decision and in [the] case of this letter [it] is the DPP himself.”

Mshololo said it would assist the court to get the clarity from the DPP in South Gauteng himself, Andrew Chauke.

“If the DPP confirms whether the final decision has been made ... whether to decline to prosecute these people or whether the matter is still being investigated or whether this docket will be combined or is combined with the docket that we are dealing with before this court, we ought to have received this clarification from the DPP's themselves.”

The docket, which the court heard was opened in 2019, five years after Meyiwa's death, named Khumalo, Longwe Twala, Gladness Khumalo, Zandi Khumalo, Tumelo Madlala, Mthokozisi Thwala and Maggy Phiri as suspects in a case of murder and defeating the ends of justice.

All but Phiri were allegedly present when Meyiwa was killed in what they described as a botched robbery. Phiri was alleged to have cleaned the bloodied scene after the others rushed Meyiwa to hospital where he was certified dead.

“We are requesting what is rightfully ours — information to say or inform us officially that [the DPP will] not prosecute.”

State prosecutor advocate George Baloyi previously told the court that exhibit C1 was a memorandum which had an unsigned indictment which implicated Khumalo, who was Meyiwa's girlfriend, and others in the murder.

The document is based on a second docket.

Chauke clarified on Monday after the disclosure of the second docket last week, saying his office did not make any decision regarding the docket.

“The alleged document does not have any status [and] was an internal opinion from a junior advocate which was without merit,” he said.

The matter has been postponed to July 12 for arguments on the issue of the second docket.

The second docket, which accuses singer Kelly Khumalo and those who were with her in the house where Senzo Meyiwa was shot dead, was only an internal ...
News
1 month ago

Language use in SA courts is a four-letter word

How is it possible that two directors of public prosecutions decide to prosecute two different sets of accused if the contents of the dockets are the ...
News
1 month ago