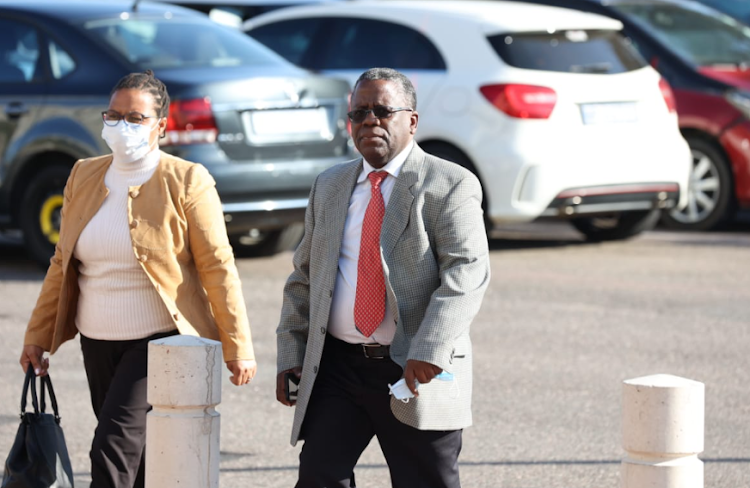 Beatrice and Sipho Shabalala. She was acquitted while he was convicted of corruption, fraud, money laundering and contravening the Public Finance Management Act relating to his role in the 'amigos case'.
Image: Sandile Ndlovu

Former KwaZulu-Natal treasurer Sipho Shabalala has been found guilty of corruption, fraud, money laundering and contravening the Public Finance Management Act relating to his role in the “amigos case” involving the award of a contract for the supply of water purification plants in return for “sweeteners”.

His wife, Beatrice Shabalala, who was facing charges of money laundering, was acquitted by Durban high court judge Dhaya Pillay on Tuesday.

The judge extended Shabalala’s bail and he will appear in court again in September for sentencing.

The first arrests in the “amigos case” — so named because it was how some of the accused referred to each other in correspondence — were made in 2010.

At that time there were 23 accused, including ANC heavyweights Mike Mabuyakhulu and Peggy Nkonyeni, but charges were withdrawn against them and others over the years.

The contracts were given to Cape Town-based businessman Gaston Savoi’s Intaka Holdings.

The Shabalalas applied for and were granted a separation of their trial.

While it was initially alleged Savoi paid more than R1m into then attorney Sandile Kuboni’s trust account as a “donation” to the ANC as thanks for contracts worth R144m, it emerged in evidence during the Shabalalas’ trial before Pillay that some of the money was used to pay expenses related to a farm owned by Shabalala and Blue Serenity, a Shabalala entity that owned a hotel in Pietermaritzburg.

The couple applied for a discharge at the end of the state’s case, which Pillay refused. They then closed their case without calling witnesses or giving evidence.

Before his arrest, the Asset Forfeiture Unit seized Shabalala’s assets, including the farm, the hotel in Pietermaritzburg, a guest house and two restaurants, said to be worth more than R5m at the time. At one stage, however, it was reported Shabalala was “broke” and Absa Bank had foreclosed on the farm to sell it to recover about R6.5m owing on the bond.

It is believed an application will now be made for the final forfeiture of whatever assets the curator still controls.

Savoi, Kuboni and others are facing criminal charges. Their trial is on hold because Savoi has launched several applications, including one challenging the constitutionality of the Prevention of Organised Crime Act and another for a permanent stay of prosecution.

Donations to the party coffers were one of the sensitive issues that could not be revealed to everyone within the ANC but were only reported verbally ...
Politics
1 year ago

Sipho Nzuza, who was allegedly attacked in Adapt-IT head honcho Sbu Shabalala’s presence, is on the mend
News
1 year ago

Other than the word of former ANC KwaZulu-Natal provincial treasurer Mike Mabuyakhulu, there is no evidence that R1m he claims was donated to the ANC ...
Politics
1 year ago