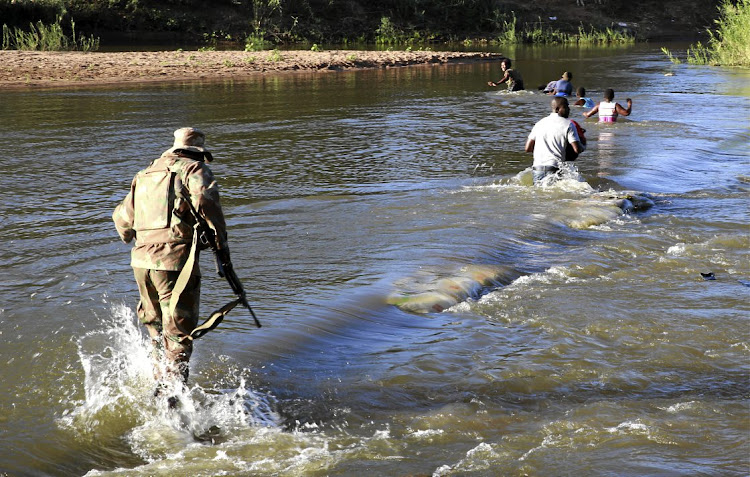 An SA soldier chases people who crossed into SA from Zimbabwe illegally to buy food in the border town of Musina.
Image: Thapelo Morebudi

Home affairs has dismissed claims by lobby group AfriForum that it is patrolling the border between SA and Zimbabwe at Musina, Limpopo.

The department said on Monday it would be illegal for AfriForum to conduct patrols.

It said members of the group are at the border to guard their farms neighbouring the borderline.

The responsibility of patrolling the border has not been handed over to any citizen or group of citizens.

“The department wishes to also state that in line with the commitments made by minister Aaron Motsoaledi in his budget vote speech for 2022/23, the Border Management Authority is proceeding with speed and has finalised the appointment of the first cohort of border guards who will be deployed along the vulnerable segments of the borderline.

“The appointment of the border guards is another significant milestone in the implementation of the Border Management Authority,” said the department in a statement.

AfriForum announced earlier this month it had deployed sniffer dogs and guards in response to concerns around SA's porous borders.

It claimed its efforts resulted in the group seizing smuggled goods valued at R12m.

“Between June and September of last year alone AfriForum’s neighbourhood watch in Musina helped to seize smuggled goods with a total value of more than R12m.

“This has a substantial impact on the illegal activities and, according to information we have received, some of these smugglers have thrown in the towel because of the resilience of our volunteers. This is an enormous success,” said the group's campaign manager Jacques Broodryk.

Zimbabwe's main nurses' union urged the government to negotiate and warned that lives would be lost if the dispute was not resolved quickly.
News
2 weeks ago

In thrall to belligerence, SA just doesn’t get what democracy is about

Hooliganism is the order of the day, from the N3 to parliament, and no-one takes a stand against it, writes Barney Mthombothi.
Opinion & Analysis
2 weeks ago

Turkish Airlines has reintroduced direct flights from Durban to Istanbul.
News
2 weeks ago