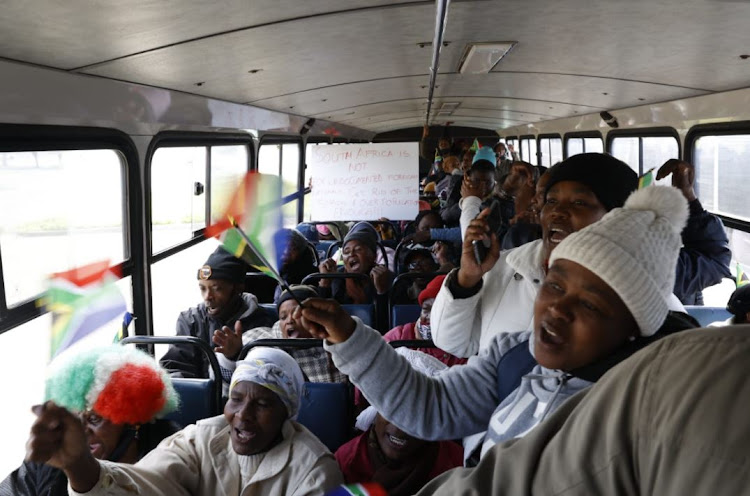 Disgruntled Soweto residents en route to the Johannesburg mayor's office to voice their displeasure over the lack of service delivery in the area.
Image: Thulani Mbele / Sowetan

A Soweto pensioner, who marched on Tuesday with fellow residents to hand over a memorandum of grievances to Johannesburg mayor Mpho Phalatse, says he has at times gone without electricity for a year.

Robert Nene, 69, who lives in Naledi, said most residents in the area struggled to pay for electricity because they are not working.

“They want a lot of money and that’s why people cannot afford to pay.”

Nene was among hundreds of Soweto residents who marched to the mayor’s office to voice their displeasure about the lack of service delivery in the township.

On Monday residents blockaded roads in the area, bringing the city’s Rea Vaya bus services to a halt.

Hundreds of disgruntled Soweto residents on Tuesday descended on the Johannesburg CBD in preparation to march to the offices of mayor Mpho Phalatse.
News
1 week ago

Nene described daily life without electricity as a struggle.

“It is very bad. Everything is controlled by electricity. The kids, who are studying, cannot do anything without electricity. If you come to these big guys, the big shots will tell you you must pay R6,500. Where are you going to get that money?”

Nene said as a pensioner he does not know how he would be able to afford what was required of him.

“I have kids and grandchildren at the house. They rely on my grant money. It is food, then electricity, water and everything else. Do you think you can make it on R1,900?”

Asked if attending the march would help solve residents’ problems, he said he did not think their problems could be addressed.

“The people are fighting on top there. That’s why they do not know what they must do. We will wait for them and see.”

Soweto residents will march to the office of the City of Johannesburg mayor Mpho Phalatse on Tuesday to hand over a memorandum containing a list of ...
News
2 weeks ago

Protesters in Soweto have brought ReaVaya bus services to a halt.
News
2 weeks ago

Johannesburg metro police have been deployed to Soweto during Monday’s protests which have brought ReaVaya bus services to a halt.
News
2 weeks ago