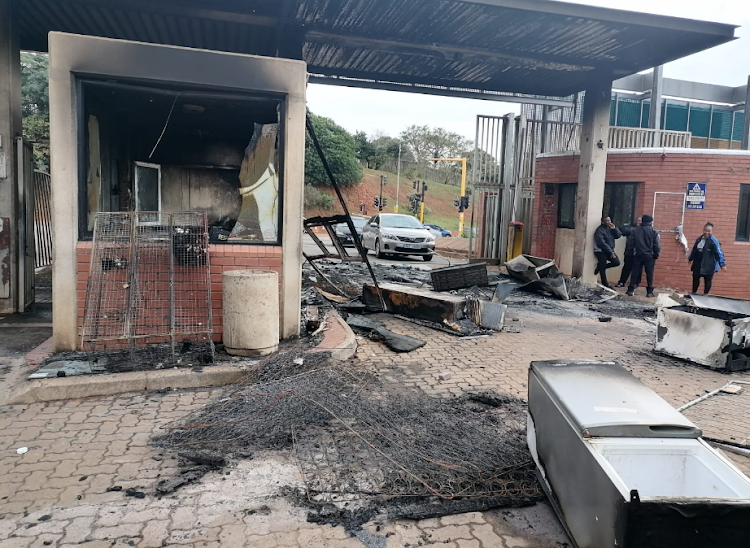 A vehicle and a guardhouse were set alight in the early hours of the morning at Mangosuthi University of Technology in Umlazi.
Image: Lwazi Hlangu

Classes and exams have been suspended at Mangosuthu University of Technology (MUT) in Durban after a violent student protest on Thursday.

A vehicle and a guardhouse were set alight in the early hours of the morning at the university in Umlazi.

“It is with sadness and shock that the university has woken up to malicious damage on campus,” the institution said.

“Regrettably, all classes will be suspended today [Thursday] and planned examinations for today are all suspended. Staff and students should not come to campus.”

Calm has since been restored as the university “beefed up” security. It said it would apply disciplinary procedures accordingly.

This is the second incident of disruption of exams at MUT in the past two weeks.

Once identified, these students will be summarily suspended and this will be followed by their expulsion. Such students do not deserve to be part of the MUT community as their presence is detrimental to law and order in the institution. MUT will be in a better state without them

Circular by Mangosuthu University of Technology

On June 13 acting vice-chancellor Prof Marcus Ramogale sent a letter to staff informing them of an “unlawful disruption” of that day’s exam.

“We are not sure what is behind this disruption, save to say that last evening we received a memorandum from the SRC [students' representative council] detailing some student grievances that the EMC [executive management committee] will discuss at an emergency meeting.

“Even before a formal response from the EMC, a small group of students took matters into their hands by denying other students the right to take their exams. Exams are sacrosanct. Their disruption is a wicked offence as it negates the existence of the university and infringes on the rights of other students.”

The university said they had caught the disruption on camera and would start identifying the culprits.

“Once identified, these students will be summarily suspended and this will be followed by their expulsion. Such students do not deserve to be part of the MUT community as their presence is detrimental to law and order in the institution. MUT will be in a better state without them,” the institution said.

A member of the SRC, who spoke to TimesLIVE on condition of anonymity, confirmed that a number of students have been suspended.

“On Tuesday a lot of students received calls to collect suspension letters and all of them have been blocked from the system, but there is still no solution or positive response from the VC about our problems.”

Suspended vice-chancellor Dr Enoch Malaza, who earlier this month was granted an interdict preventing Mangosuthu University of Technology ending his ...
News
5 months ago

The SRC released a statement on Wednesday calling for National Student Financial Aid Scheme (NSFAS) allowances for students whose appeals were approved and “conducive” students accommodation, especially for those with disabilities.

The SRC also demanded that the acting VC be replaced with a permanent one.

“We expect and hope for positive feedback on these issues and reiterate the demand for lifting all suspension letters.

“Failure by the university to respond in a positive manner, we shall meet in the battlefield. We are young, energetic and we have been long tested. It is high time we unleashed commodified and sacrosanct anarchy.”

Students protesting at the University of KwaZulu-Natal's Westville campus on Tuesday claimed that residences had not been cleaned since cleaning ...
News
3 weeks ago

UCT condemns disruption of midyear exams amid protests over insourcing

The University of Cape Town has condemned the disruption of midyear exams and confirmed it has opened cases of trespassing and malicious damage to ...
News
1 month ago

Protests and expulsions will not stop racism, and soon another student will urinate on a peer’s belongings
Opinion & Analysis
1 month ago