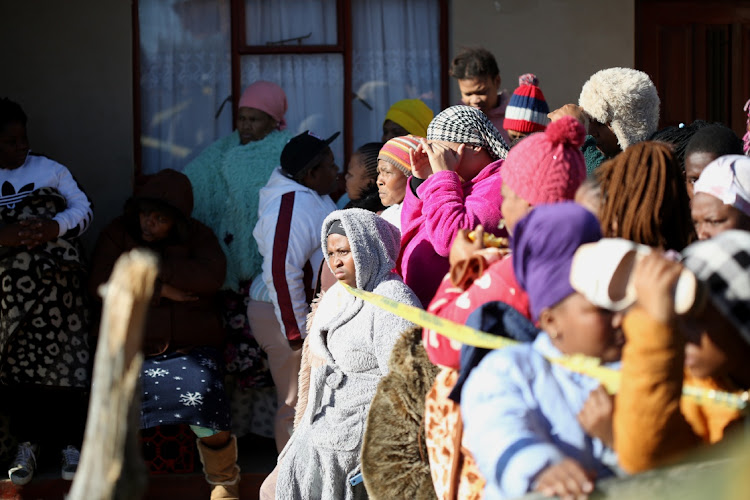 Residents and family members outside the tavern in Scenery Park where 21 people died in the early hours of Sunday morning in East London
Image: DAILY DISPATCH/ MARK ANDREWS

Police minister Bheki Cele broke down in tears outside a morgue where he had viewed the bodies of the children killed at a tavern in the Eastern Cape in the early hours of Sunday.

Cele confirmed that all those who had died in the Eyobeni tavern in Scenery Park, East London, were minors — aged between 13 and 17.

Earlier, police had said those who had died were between the ages of 18 and 20.

While the death toll had earlier been put at 20, the number had increased to 21 by Sunday afternoon. The cause of the tragedy has not yet been determined.

As Cele cried, families who had gathered at the morgue also broke down, some in disbelief, as they waited to be let into the premises to identify their children.

The Daily Dispatch had earlier reported that initial speculation was that the patrons were exposed to some form of poison as none of the bodies had any visible injuries.

The publication reported that bodies were lying strewn across tables, chairs and on the floor.

Officials have since revealed they were still waiting for some families of the deceased to come forward and identify and claim their bodies.

Addressing community members outside the tavern earlier, Cele said a forensic team from Pretoria had been brought in to assist with investigations.

Cele said they initially received reports that a stampede had occurred but said evidence on the scene ruled this theory out.

“But I cannot disclose to you what happened until I have been told by the investigating team.”

He however pointed out some faults they found at the tavern, including the fact that it had only one entry and exit point, was in a residential area and was seemingly open to underage children.

“We  need to come back to this area to see what is happening in the shebeens and not only come back once they have killed our kids.

The owner of the tavern, Siyakhangela Ngevu, earlier told eNCA he was not present when the incident happened.

Enyobeni Tavern owner, Siyakhangela Ngevu claims he was not present when the tragedy occurred. Ngevu says security guards called him to notify him about the chaos. At least 20 people have died at the tavern in Scenery Pak in the Eastern Cape. #Today #DStv403 pic.twitter.com/POEKtr4v4P

He said he was told by security guards to rush to the scene after the incident had occurred.

The tavern owner, who said he owns more than one tavern, said he arrived to chaotic scenes and many young children in the street.

“Others were forcing themselves in. It was evident that the security guards at the gate were finding it difficult to control the situation.”

Ngevu said the high volume of people on Saturday night was not what they had expected.

On the deaths, Ngevu said he was not sure what had led to them but said he would not dismiss allegations that pepper spray had been sprayed, leading to the tragedy.

He said they usually barred children from entering the facility and once denied entry, those children usually loitered outside the premises.

He conveyed his condolences to the families.

“I didn't mean for this to happen and I sympathise with them.”

He called for calm and for police to be allowed to conduct their investigation.

Meanwhile, President Cyril Ramaphosa has expressed his condolences and concern.

Ramaphosa, who is currently on a working visit to Germany, sent through a statement via his office calling for a proper investigation into what occurred.

“The president expects the law to take its course following investigations into the tragedy,” his office said.

Ramaphosa said: “This tragedy is made even more grave by its occurrence during Youth Month — a time during which we celebrate young people, advocate and advance opportunities for improved socioeconomic conditions for the youth of our nation.”

Police have since shed more light on the incident.

Brig Tembinkosi Kinana said they were informed of the incident at around 4am after a call from community members.

Seventeen people had been found dead inside the premises while the others died in hospital.

“The circumstances surrounding the incident are currently under investigation. Police do not want to make speculations regarding the cause of the incident as that may risk jeopardising the sensitive investigation that is under way,” he added.

Eastern Cape premier Oscar Mabuyane also conveyed his condolences to the families of the deceased.

He had rushed to the scene with MEC for community safety Weziwe Tikana-Gxothiwe and provincial police commissioner Maj-Gen Nomthetheleli Mene.

Mabuyane joined Ramaphosa in calling for no stone to be left unturned in uncovering the cause of the tragedy.

He also called for greater parental and community involvement and vigilance in monitoring not only taverns and nightclubs but also the maintenance of general law and order in their communities.

“We call on parents and legal guardians not to abdicate their responsibility to their children or minor children entrusted in their care. As a parent myself, I am pained by this tragedy and cannot imagine losing a child in this manner,” said Mabuyane.

“We grieve with parents and families at this hour and ask for your patience in getting to the facts around this tragic event. We are saddened by the loss of young lives, future leaders of our country, future breadwinners for their families, and for all the investments made by their families in them that now have evaporated in an instant,” he added,

Of the 21 deceased, eight are girls while 13 are boys.

SA Breweries has launched a platform to curb irresponsible drinking as the festive season approaches.
News
8 months ago

The legal drinking age could be changed from 18 to 21.
News
1 year ago

A new trend has emerged with alcohol companies producing non-alcoholic versions of their drinks. Because of this, more complaints are expected to be ...
Lifestyle
2 years ago