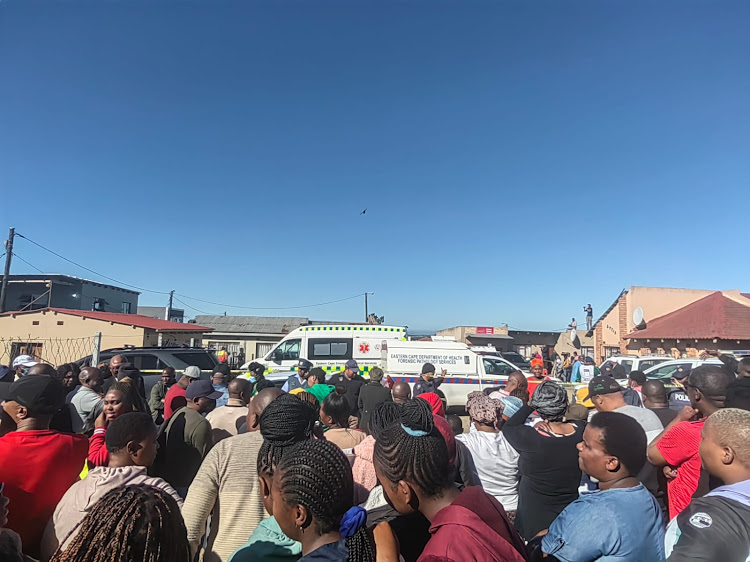 Onlookers and distraught parents converged on the scene of the death of a group of patrons at an East London tavern on Sunday morning.
Image: Bongani Fuzile

A 17-year-old who survived the Enyobeni tavern tragedy says she “fainted for three hours and when I woke up I could hear a man saying I must be dumped among the dead”.

The teenager recalled how she collapsed while unsuccessfully trying to resuscitate her two friends who eventually died in her arms at the tavern in Scenery Park, East London, in the early hours of Sunday morning.

She said some patrons attempted mouth-to-mouth resuscitation when people started collapsing inside the tavern.

The teen, from Nompumelelo, alleged the drama unfolded when bouncers closed the door and a group of youngsters tried to get out while others forced their way inside.

“We were coming from upstairs aiming for the exit downstairs when pandemonium broke out,” the survivor said during a radio interview on Monday.

“More people coming from upstairs fell on us trying to force their way out through the exit downstairs while others were trying to get inside.”

The victim alleged a gas-like substance was sprayed when the chaos unfolded.

There were hundreds of people in a limited space. “It was difficult to breathe, it was hot,” she said. People started collapsing and the situation became uncontrollable.

After trying to save her friends, the 17-year-old fainted.

“I only woke after three hours. It was like I had already died, I had given up.

“People from upstairs were forcing their way out and running over the ones who had collapsed, including myself, and I noticed that I had bruises when I regained consciousness.”

Bouncers allegedly closed the door after the gas-like substance was sprayed. The survivor said there was no fight at the tavern before the chaos.

“Everything was fine,” she said, adding that free alcohol and food was served to the patrons at some stage.

Her parents were not aware she had gone to the tavern.

“I asked a lady, whom I believe was related to the owner, next to me to give me a phone to call my parents and let them know what had happened.

“The lady asked my age and I told her. She asked me how I got to know about the event and I told her I saw a trending post on social media. When I asked for water, she said I should be given Savanna instead.”

Five bodies from the tragedy have not yet been identified, the Eastern Cape health department said on Monday.

The department confirmed the death toll remained at 21.

Support independent journalism by subscribing to the Sunday Times . Just R20 for the first month.

Five bodies from the East London tavern tragedy have not yet been identified, the Eastern Cape health department said on Monday.
News
1 month ago