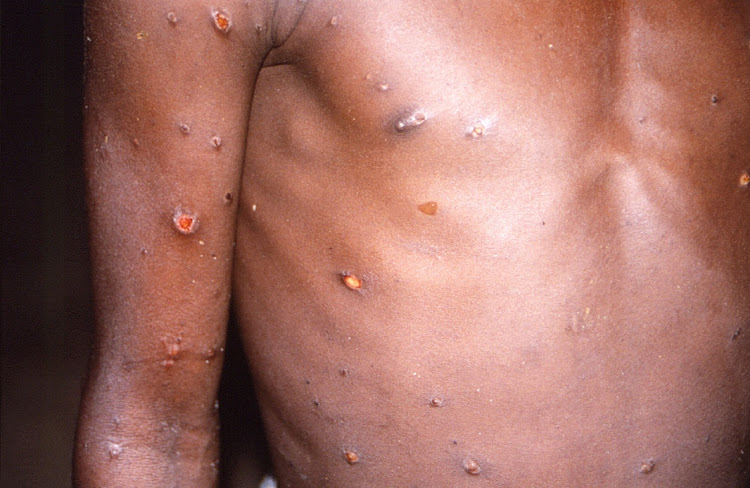 The arm and torso of a patient with skin lesions due to monkeypox during an outbreak of the virus in the Democratic Republic of Congo in 1996 and 1997.
Image: CDC/Brian W.J. Mahy/Handout via REUTERS

After SA recorded its first monkeypox case last week the National Institute for Communicable Diseases (NICD) urged the government to reimpose some regulations introduced in response to the Covid-19 pandemic.

Health minister Joe Phaahla confirmed a 30-year-old Gauteng man had tested positive for monkeypox. He said the patient had no travel history and the virus could not have been acquired outside SA.

Monkeypox is usually a mild disease manifesting as blisters on the skin, self-limiting and with a fatality rate of 1%.

The disease has previously been reported in African countries such as Nigeria, DRC, Central African Republic and Ghana in the early 2000s. The current outbreak is dominated by cases in the UK, Spain, Germany, Portugal, France, the US, Canada and Australia.

Speaking to EWN, the head of the centre for respiratory diseases and meningitis at the NICD, Professor Cheryl Cohen, urged government to reimpose Covid-19 regulations to keep track of the spread of monkeypox.

The institute indicated the symptoms of monkeypox are similar to those of Covid-19.

It said SA could record more cases in the coming days.

Speaking on eNCA, public health activist Dr Kapil Narain said there could be many patients with the virus who had not yet consulted medical professionals to confirm the infection.

“The focus should be more on testing and a robust community and public health response to ensure there is an increased awareness of the symptoms.”

He said testing for the virus should be scaled up, but cautioned against panicking.

“There is no need to panic. The symptoms are less severe and not as infectious. However, we still need to be to exercise caution and adhere to basic public health measures.”

Phaahla said given the recording of the virus is still in its early days in SA, the NICD was conducting online service training for health workers to detect the disease so laboratory tests could be done.

“The disease only spreads through close droplets, so you cannot get it by being in the same room with an infected person.

“Thus far it has been dominant in men who have sex with men, but the main feature is that transmission is through close contact,” he said.

How do I know if I have Covid-19 or early onset of measles?

Measles has many similar symptoms to Covid-19 before a patient develops the rash often associated with the disease.
News
2 months ago

Can Covid-19 carry in the wind?

Officials in a Chinese city on the border with North Korea believe Covid-19 may be carrying in the wind over the border, and have instructed ...
News
2 months ago

Can getting the vaccine protect my unborn child?

Will getting the jab help protect your baby?
News
1 month ago