Lawyer U-turns on claims against investigating officer in Ndlovu trial 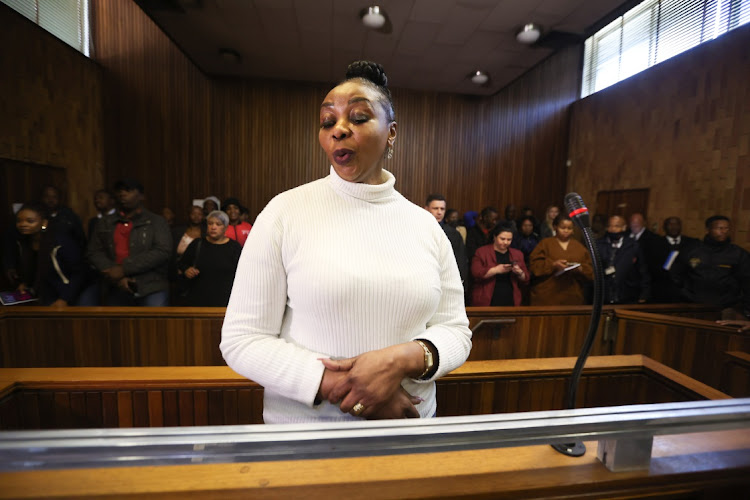 Rosemary Nomia Ndlovu's legal aid lawyer has made a U-turn on allegations the investigating officer in the case, Sgt Keshi Benneth Mabunda, asked her colleagues personal and inappropriate questions about her.

Appearing in the Kempton Park regional court on Thursday, Ms Baloyi-Makamu, as she was identified, confirmed what state prosecutor Riana Williams put to the court — that it was “a misunderstanding”, apologies had been made and the matter “settled”.

Baloyi-Makamu missed the last court proceedings. A colleague who stood in on her behalf told the court she was so uncomfortable she wanted to withdraw from the case and report the matter to Mabunda’s superiors. Her stand-in said they received information from another prosecutor, telling them Mabunda had asked where Baloyi-Makamu resided, the places she frequented and who was she married to. Mabunda denied the claims.

On Thursday, proceedings got off to a late start because of load-shedding.

Ndlovu, who is serving six life terms for murder and another 125 for conspiring to commit murder, fraud and defeating the ends of justice, sat on a bench next to department of correctional services (DCS) officials. She ignored the media, who took pictures of her as she conversed with DCS officials.

A few metres from her sat her co-accused, Nomsa Mudau, who tried to hide her face by wearing a mask and beanie pulled down to just above her eyes.

They were nabbed after a “hitman” they allegedly hired to carry out the job told authorities about the “plot”. The case was initially withdrawn, but reinstated in April. The alleged hitman is expected to be a key witness in the trial.

Ndlovu also faces a charge of plotting to murder Mabunda after her arrest in March 2018.

Both cases were postponed to September 15 for representations.

Convicted serial killer Rosemary Ndlovu is expected to appear at the Kempton Park magistrate's court on Thursday.
News
1 month ago

Convicted killer cop Nomia Rosemary Ndlovu and her co-accused Nomsa Mudau appeared in the Kempton Park magistrate’s court on May 25.
News
2 months ago

Heavily pregnant Nomsa Mudau told the court she was due to give birth later this month.
News
3 months ago

Nomia Rosemary Ndlovu was jailed last year after the court found she had a hand in the murders of five of her relatives and her lover.
News
4 months ago