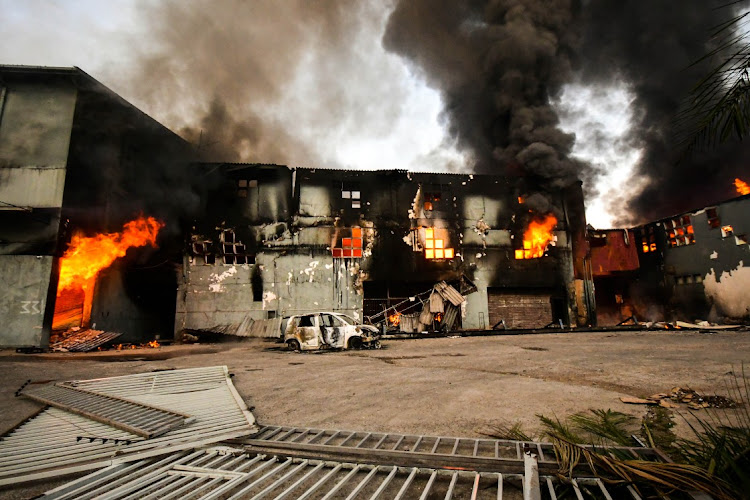 Burning factory in Sea Cow Lake area on July 12, 2021 in Durban, South Africa. It is reported that a considerable number of shops and businesses were looted over the weekend following a wave of violent protests after the incarceration of former South African President Jacob Zuma.
Image: Gallo Images/Darren Stewart/ File photo

One year after the July unrest, investor confidence in KwaZulu-Natal is yet to be restored, with many businesses across the country uncertain that their money is safe in the province.

This is according to Durban Chamber of Commerce & Industry CEO Palesa Phili, who addressed the media at a briefing by KwaZulu-Natal premier Sihle Zikalala on Friday.

Zikalala and his team, including economic development tourism and environmental affairs Ravi Pillay MEC, conducted oversight visits to three malls in and around Durban that had been reconstructed following the unrest last year when they were destroyed by looters.

In contrast to Zikalala’s statement that major investments had come to the province - indicating the confidence investors still had in the local economy - Phili said businesses in SA remained doubtful that their investments were safe in KwaZulu-Natal.

Phili said Durban’s recent House and Garden Show, which made a comeback after a two-year hiatus due to lockdown restrictions, had indicated a bleak investor confidence outlook.

“Businesses don’t know what is happening from a security point of view,” Phili said.

“Recently we had a house and garden event and the figure we received is that 40% of companies that were supposed to come from outside KZN chose not to come because they felt this is not a very safe province.”

Phili said private-public-partnerships (PPP) were part of the solutions they had agreed on with the state after the unrest.

“The biggest issue we faced is that we had no intelligence on the ground in terms of what was coming. The worst thing we identified was that the SAPS, metro police, private security firms as well as community policing forums were not working together during the unrest.”

Between July 8 and July 17 last year, parts of KwaZulu-Natal and Gauteng were cast into turmoil when thousands of people embarked on acts of looting that resulted in 354 deaths and over a R50bn loss to the national economy - R30bn of which is estimated losses in KwaZulu-Natal alone.

Zikalala said the impact of the unrest had affected some sectors more than others.

“The retail industry disproportionately bore the majority of the impact, with over 200 shopping malls targeted and 1,787 retail stores looted and damaged. 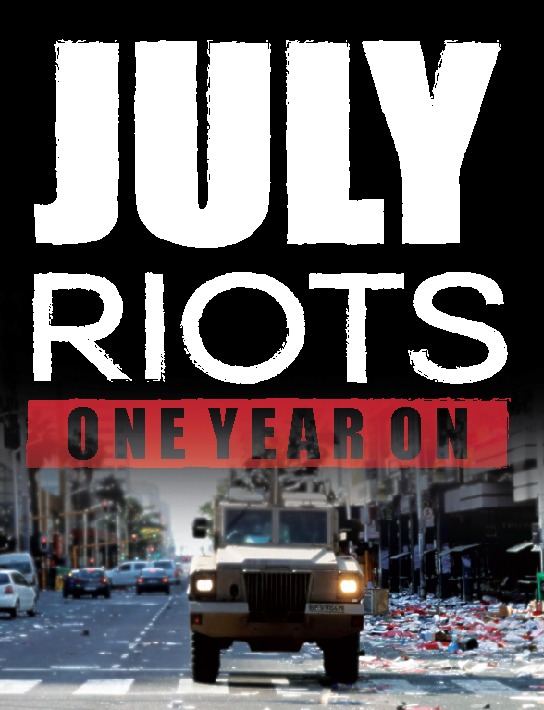 “The manufacturing sector saw damage to manufacturing plants and lingering logistical issues which pushed up the cost of production.

A number of major players within the industry were seriously affected:

▪ LG electronics, a TV manufacturing plant in Durban which opened in January 2020 creating 100 jobs in the process, was burned down and its warehouse looted. Efforts to encourage the company to rebuild its factory are underway.

▪ International food manufacturer Tiger Brands estimated the costs of the loss of stock to be in excess of R150m.

▪ South African Breweries suffered losses close to R80m as the company’s depots in Pietermaritzburg and Newcastle were looted.

▪ Toyota SA suspended production at its Prospecton plant in Durban and exports from the plant were halted.

▪ In Isithebe Industrial Park, a new clothing factory (Kingspark Manufacturers) which was set up in September 2020 creating 600 jobs was destroyed as machinery and raw materials were looted.

▪ The unrest also saw restaurants closing down and hotel bookings being cancelled, further affecting the recovery of a sector that had been seriously affected by pandemic-related restrictions.

At least 11 of the properties suffered fire damage, necessitating an extensive rebuild process. The cost of repairing the buildings was estimated at over R385m.

Zikalala said almost a third (R8.3bn) of the claims received by Sasria after the unrest had yet to be paid out.

“Sasria received 15,120 post-unrest claims totalling R36bn, of which over 13,000 (R23bn) were from KZN. To date, R15.2bn claims have been paid out to KZN beneficiaries while R8.3bn payout is still outstanding.

According to Zikalala, while most insured businesses (big and small) hd rebuilt and were back to normal, a number of big businesses, including mega-malls such as Edendale in Pietermaritzburg, Bridge City in KwaMashu and Springfield Value Centre, were still under reconstruction.

“Of concern is that in KwaMashu township a number of malls, centres and shops remain closed, including Bridge City, KwaMashu Centre and most of Dube Village near Inanda.

“While plans to rebuild some of these centres are in motion we remain worried at the ongoing impact on jobs and access to services from the community. Bridge City is targeted to open in March 2023.”

▪ In ILembe, the rebuilding of Mandeni industrial estate is in progress and most of the affected malls and centres across the district have reopened, including KwaDukuza Mall.

▪ At King Cetshwayo district most businesses have long resumed operations and the situation has normalised. “A notable concern remains the closure of eSikhawini Mall in Esikhaleni township, which is expected to open in June 2023 after the conclusion of the rebuilding process.”

▪ In Zululand although Nongoma was the hardest hit local municipality, almost all the affected shops and malls are now operational with the exception of a few shops that sustained burning in the Nongoma Plaza.

▪ In uMkhanyakude most affected malls and shopping centres in the district are operational, including Jozini Mall and the latest Spar to be operational in uMkhanyakude in Hlabisa is now open and all temporarily displaced workers are now back to work.

▪ In the uMgungundlovu district the rebuilding process is well underway. The construction of the Brookside Mall at a cost of R130m, creating 200 construction jobs and +200 permanent jobs, is nearing completion. At the same time, active engagement with local forums, civic structures and ward councillors has ensured that the rebuilding of Edendale Mall at a cost of R231m will commence shortly.

One year on: Justice, crime prevention and security cluster to give progress report on July 2021 unrest

The justice, crime prevention and security cluster will give a progress report on the July 2021 violent unrest and looting on Friday.
News
1 month ago

POLL | A year later, do you think those responsible for the unrest will ever be brought to book?

Will those responsible for the unrest ever be held to account?
News
1 month ago

Twelve months later South Africans are still trying to make sense of the riots and pick up the pieces.
News
5 days ago