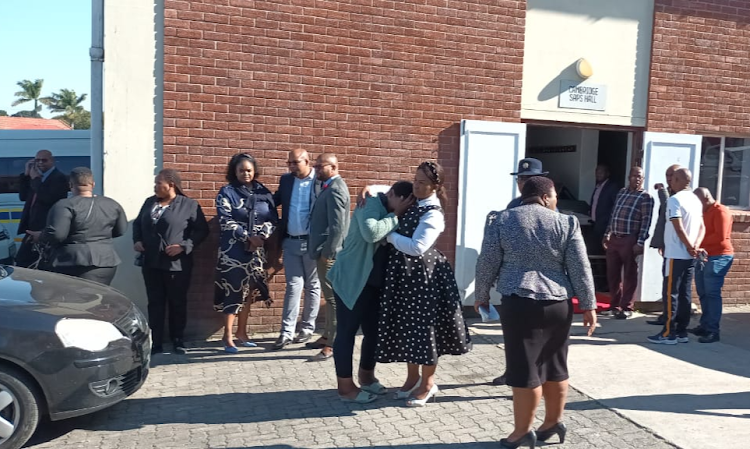 Parents and family members wait outside the Cambridge police hall in East London ahead of their meeting with the police minister and Eastern Cape premier over the deaths of 21 teenagers at Enyonbeni Tavern.
Image: SITHANDIWE VELAPHI

The frustrated parents of 21 teenagers who died at Enyobeni Tavern in Scenery Park, East London, on June 26 will have to wait longer to find out what killed their children.

Parents and family members cried out in frustration when learning they would not yet be told what killed their children. They were told the individual families would receive pathology reports once investigations were concluded.

Police minister Bheki Cele and Eastern Cape premier Oscar Mabuyane announced that laboratory results had revealed the presence of carbon monoxide and toxic alcohol methanol, but this had not yet been pinned down as the cause of death so more tests will be needed.

Eastern Cape health department deputy director-general for clinical services Dr Litha Matiwane said they were waiting for blood results to determine if the level of methanol ingested was toxic.

There has been speculation about the cause of deaths, ranging from a stampede to teargas poisoning and carbon monoxide asphyxiation caused by generator fumes.

While ruling out several possibilities, police and health officials have remained tight-lipped after sending samples to a Cape Town laboratory for additional testing.

The province’s liquor industry and enforcement by the liquor board came into sharp focus after it emerged all 21 of those who died were under the legal drinking age, with the eldest at 17 and the youngest 13.

WATCH | Enyobeni update: all 21 children had methanol in their blood

All the children who died in the Enyobeni tavern tragedy had methanol in their blood.
News
1 month ago

Police and the health department will on Tuesday provide an update on investigations into the cause of the Enyobeni tavern tragedy.
News
1 month ago