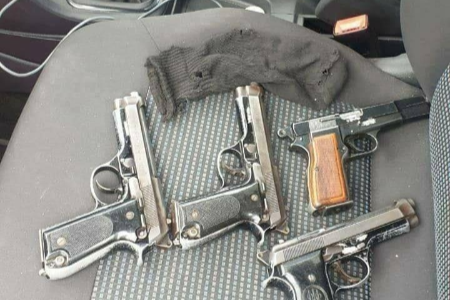 Urbanus Lomboleni Shaumbwako was arrested allegedly in possession of 12 Namibian police firearms, their serial numbers filed off, after a high-speed chase with police in 2020.
Image: Supplied

Urbanus Shaumbwako, one of the Namibians accused by former spy-boss Arthur Fraser of helping to steal $4m (R68) in cash from President Cyril Ramaphosa, allegedly wants to plead guilty to gun possession charges.

His attorney — who asked TimesLIVE not to name him — told the Cape Town regional court on Tuesday that due to “recent developments of a sensitive nature” Shaumbwako wanted a remand in his case to start plea and sentencing negotiations with the state.

Asked whether the recent developments included Fraser’s allegations that Shaumbwako was among the burglars at Ramaphosa’s Phala Phala game farm, the attorney declined to comment.

Shaumbwako has been in custody since his arrest in October 2020.

City of Cape Town traffic officers, who at the time stopped Shaumbwako at a roadblock,  were also in court waiting to testify.

The officers stopped Shaumbwako, who at the time was driving his housemate and fellow Namibian Erkki Shikongo’s VW Polo, at a roadblock when they noticed a red bag on the passenger seat floor.

Shaumbwako sped away from the suspicious officers and a car chase ensued. However, thanks to their driving skills, they eventually caught Shikongo.

Shaumbwako attempted to flee on foot into the township of Dunoon but was soon arrested by two officers who gave chase on foot.

TimesLIVE investigation sources also revealed that according to Shaumbwako’s cellphone data obtained as part of the investigation against him, he was in Cape Town when Fraser alleged the theft at the Phala Phala game farm took place on February 9 2020.

The case was postponed until September 1 for plea and sentencing negotiations.

Shaumbwako was remanded until his next appearance and his lawyer was told to hand over proposals for the plea and sentencing agreement well before the next appearance to avoid another delay.

LISTEN | 'I will not be intimidated, distracted or bullied into submission,' says Ramaphosa

EFF wants police commissioner Fannie Masemola to go, and here’s who Malema wants to replace him

“When you look at KwaZulu-Natal police commissioner Nhlanhla Mkhwanazi in uniform, you see a man who is disciplined, a man who is determined to deal ...
Politics
1 month ago

Move is seen as part of damage control following the fallout over the alleged coverup of Ramaphosa’s Phala Phala farm burglary.
Politics
1 month ago

The Independent Police Investigative Directorate (Ipid) said on Monday it had obtained a formal statement from the African Transformation Movement ...
Politics
1 month ago