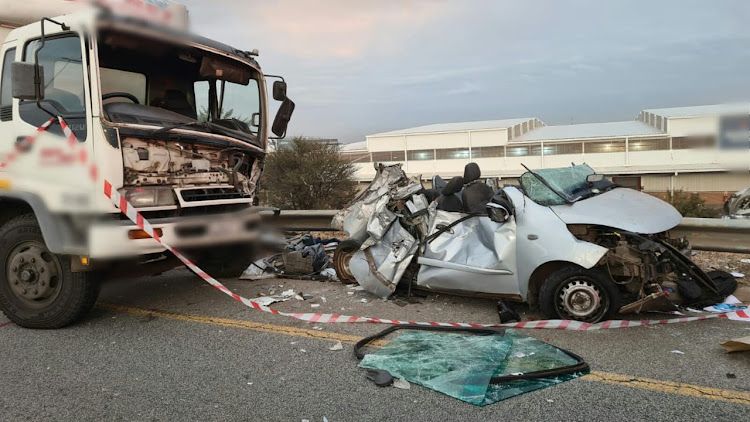 A truck and car were involved in a collision at 4am on Wednesday on the R21 in the Olifantsfontein area.
Image: Emer-G-Med

An early morning crash in Gauteng has left one person dead and three injured.

Emer-G-Med said a truck and car were involved in a collision at 4am on Wednesday on the R21 in the Olifantsfontein area.

“Reports from the scene are that a delivery vehicle crashed into a stationary light motor vehicle.

“Four men, all aged in their 30s, who were seated in the vehicle at the time of impact suffered injuries.”

Two men were trapped in the wreckage. One suffered fatal injuries and was declared dead by paramedics while the second was in a critical condition. He was stabilised at the scene and transported to hospital.

The occupants of the delivery vehicle were not injured.

The deputy minister of transport, Sindisiwe Chikunga, is grieving the loss of six family members in a car crash near Ladysmith.
News
3 weeks ago

Seventeen people, including a police officer, were killed in two separate horror crashes on KwaZulu-Natal's roads on Saturday night.
News
3 weeks ago