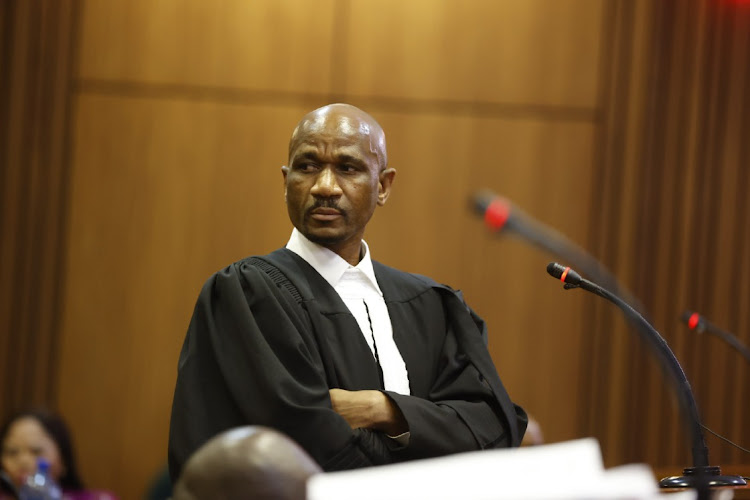 Advocate Malesela Teffo has told the prosecution he is still the advocate for some of the accused in the Senzo Meyiwa murder case. File photo.
Image: Thulani Mbele

Police minister Bheki Cele must be dismissed and investigated for abuse of his position and National Prosecuting Authority (NPA) head Shamila Batohi must allocate a senior official to prosecute musician Kelly Khumalo in connection with the murder of Senzo Meyiwa.

These are two of the 10 demands Malesela Teffo, the advocate who represented four of the five accused before withdrawing on July 12, has made before he will return to the case.

In a letter to prosecutor George Baloyi dated July 25, Teffo said: “Be informed that I am not going to withdraw in this matter and give the state undeserved due.

“We have since resolved my withdrawal issue with the relevant stakeholders in the matter and I am still  the defence counsel for accused 1 and 4.”

Unethical: that is how advocate Malesela Teffo’s dramatic withdrawal from the Senzo Meyiwa murder trial has been described by people in the legal ...
News
1 month ago

When he withdrew as advocate for Muzikawukhulelwa Sibiya, Bongani Ntanzi, Mthobisi Mncube and Mthokoziseni Maphisa, Teffo said he was quitting because of the harassment he claimed to have been subjected to by the judge, the police and the NPA.

In the letter, Teffo made a number of accusations against presiding judge Tshifhiwa Maumela, advocate Zandile Mshololo — counsel for the other accused, Fisokuhle Ntuli — and the prosecution.

He also alleged “a sangoma was on a mission to cause him to collapse inside the court”.

"My family has been abused for years abatholi lutho yet nobody bothers to investigate the wife," said Kelly Khumalo's sister Zandie Gumede.
TshisaLIVE
1 month ago

He claimed the sangoma had been attending court and was linked to Maumela.

He listed a number of conditions “we need to give the state before we could reconsider our stand in participating in these criminal proceedings again”. The defence and accused 1 to 4, who are in custody,  will not attend the proceedings until the conditions are complied with, he said.

How is it possible that two directors of public prosecutions decide to prosecute two different sets of accused if the contents of the dockets are the ...
News
2 months ago

Teffo said his team wanted a separate trial from that of Ntuli.

“We need judge Bert Bam and/or [the] appointment of the retired judge in this matter.”

Baloyi had no title to prosecute and a new prosecutor must be appointed, Teffo said. Teffo also wanted advocate Andrew Chauke, the director of public prosecutions in Johannesburg, to withdraw “fabricated charges” against him.

Teffo said he heard on the news the case had been postponed until next Tuesday for the four accused to obtain new legal representatives.

“I had made it clear before the court that I withdrew from the matter as the defence counsel and as such did not include the withdrawal of my attorney Anthony Thobane.

“It was therefore bizarre for yourself as the state prosecutor advocate Mshololo for accused 5 and the court to made conclusion that Mr Thobane should be excluded legally from representing accused 1 to 4 in this matter.” Teffo said.

The date of August 2 was made without consulting Thobane.

Teffo said if the four accused had been informed they needed to get new legal representatives, they could have informed the court there was no need for a postponement because they were still represented by Thobane, who had the right to appear in the high court.

Meyiwa,  who was a goalkeeper for Bafana Bafana and Orlando Pirates, was shot dead in October 2014 while at musician Kelly Khumalo's mother's house. The two were in a relationship and had a child. Khumalo and other people who were in the house at the time claimed Meyiwa was killed in a robbery gone wrong at the house in Vosloorus in Ekurhuleni.

Teffo claimed Khumalo and the others who were in the house were involved in Meyiwa's killing and should be tried instead of his clients.

"Security for me is literally everything."
TshisaLIVE
3 weeks ago

Orlando Pirates boss Irvin Khoza says he will never be at peace until the killer or killers of his club’s former captain and goalkeeper Senzo Meyiwa ...
Sport
1 month ago

The application brought by advocate Malesela Teffo to have a trial within a trial in the murder case of Orlando Pirates goalkeeper Senzo Meyiwa has ...
News
2 months ago