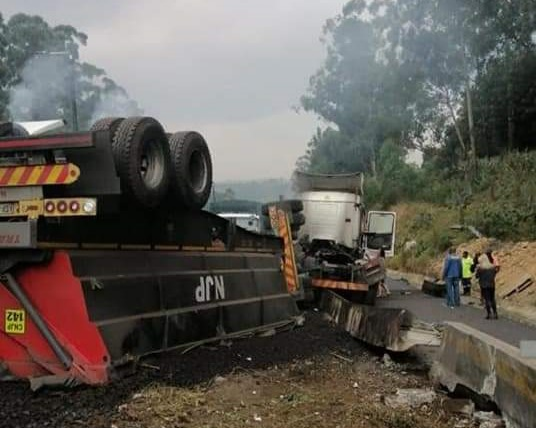 One person was injured when a truck's brakes failed and it slammed into two other trucks on the N3 in Townhill on Wednesday afternoon.
Image: supplied

One person was injured when a truck's brakes failed and it slammed into two other trucks on the N3 in Townhill near Pietermaritzburg on Wednesday afternoon.

“The crash resulted in the closure of both carriageways for a long period of time. We do know that the area is a construction zone and is considered a high-risk area so we would like to advise motorists to be extremely cautious when travelling in that construction zone.

“We know many people are still speeding in that area.”

WATCH | A truck's brakes failed on the N3 in Townhill, Pietermaritzburg, crashing into two other trucks. Video: supplied. pic.twitter.com/PYtawZvCl5

Sanral currently has three contracts which are adjacent to each other. What is being repaired is the upgrading of the section between Cato Ridge and Pietermaritzburg, where the current four-lane road is being upgraded and widened to provide eight lanes (and nine lanes on steep sections). These upgrade projects have been necessitated by increased traffic volumes in recent years.

“Sanral has another contract between Pietermaritzburg and Hilton, where the existing road has reached the end of its design life. Rehabilitation of this section of the N3 is necessary for the road to be able to carry the increased traffic loads and volumes. On this contract, there are no additional lanes being built,” said Sanral eastern regional manager Dumisani Nkabinde.

“On the two contracts between Howick and Heidelberg, N3TC is also rehabilitating the existing pavement structure to be able to carry the current and near-future traffic loads.”

He said all the current projects had different time frames with the three current upgrade projects between Cato Ridge and Pietermaritzburg anticipated to be completed in 2025 and the rehabilitation project at Townhill to be completed by the end of 2022.

“Due to traffic demands, additional sections of the N3 between Durban and Pietermaritzburg are earmarked to be upgraded in the next eight years.

“The reality is that if these upgrade projects are not implemented or the road pavement structure is not rehabilitated, the loss due to delays during road works will be far exceeded by the loss of the economy due to insufficient capacity of the road to carry the increased volumes of traffic and the road user cost due to damage to vehicles and goods as a result of deteriorated roads.”

What happened during the N2 highway shoot-out in KZN

The occupants of a fully laden taxi burned to death in a pile-up involving nine vehicles on the N3 in KwaZulu-Natal on Saturday.
News
2 months ago