Yet another lifeline for Zuma as corruption trial adjourned 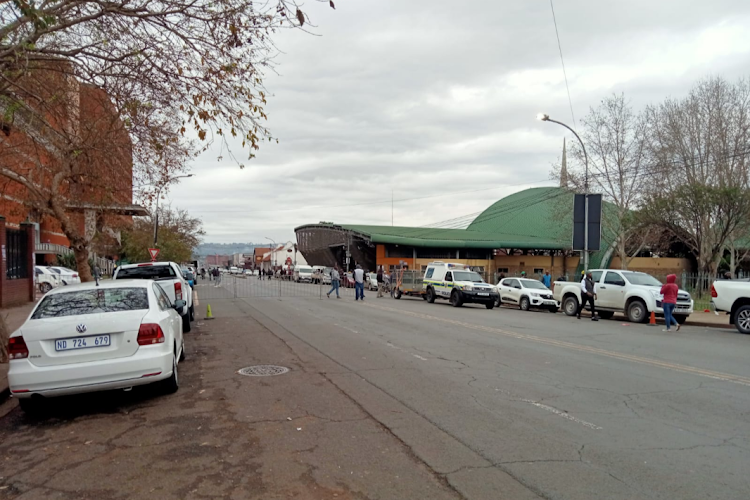 The road outside the Pietermaritzburg high court was quiet on Monday before Jacob Zuma's corruption trial hearing.
Image: Mfundo Mkhize

Another holding date and “another bridge to cross”.

That was the outcome of a brief hearing before judge Piet Koen in the Pietermaritzburg high court on Monday after State vs Jacob Zuma and Thales was called.

Both Zuma and the representative of French arms company Thales were not present, having previously been formally excused. That the case would have to be adjourned again was predetermined.

Monday was a holding date, set in May this year, for the outcome of a decision by Supreme Court of Appeal (SCA) judge Mandisa Maya that she reconsider an earlier ruling by two appeal judges refusing Zuma leave to appeal against Koen’s dismissal of his “special plea” aimed to stop lead state advocate Billy Downer prosecuting him.

A few days later, Maya turned him down. In June, Zuma approached the Constitutional Court seeking an order compelling the SCA to hear the appeal. The state has opposed this, arguing it has no prospects of success and, essentially, Zuma is wasting time.

However, on Monday Koen said the trial could not begin until it was resolved.

Downer said: “We have made our own inquiries [with the apex court] and have determined it has not been resolved and there is no order.”

One suggestion for the delay was that the court was still in recess.

“So we are in the same situation (as in May),” Koen said, adjourning the matter to another holding date, October 17, and directing that if the apex court had ruled (and if it was against Zuma), the trial would begin on November 7 and run until December 2.

He asked the legal representatives to give dates for their availability and excused Zuma and Thales from attending court on the new holding date. If the Constitutional Court had not ruled by the holding date, “another holding date will have to be set, but we will cross that bridge when we get to it,” Koen said.

However, whichever way the apex court rules, it is unlikely the trial will proceed in November. This is because in Zuma’s application to the apex court, he has asked that the appeal first be heard in the SCA. If that fails, he will undoubtedly apply for direct leave to appeal to the Constitutional Court.

It’s a convoluted approach, as pointed out by Downer.

“The convoluted path he has chosen — the present application aimed at a return to the SCA before a further application for leave to appeal to the Constitutional Court — is inimical to the interests of justice,” Downer said in his affidavit.

Stalingrad 101: another ‘special plea’, another delay in Zuma’s corruption trial

“Through this application he aims to set in train a series of appellate proceedings which are doomed, and will have the effect of delaying, yet further, the start of his criminal trial on the merits.”

Downer insists that neither the SCA nor the Constitutional Court can, in law, hear any appeal in the “special plea” matter because the issues Zuma has raised — the alleged bias and misconduct of Downer — can only be challenged once, and if, he is convicted and sentenced.

After pleading not guilty to the charges, Zuma raised the special plea in terms of the Criminal Procedure Act, saying Downer had no “title” to prosecute him. However, Koen ruled that “title to prosecute” had nothing to do with bias or misconduct but was rather about “legal standing” or authority to prosecute, which Downer had.

He said Zuma’s complaints about Downer would be more properly raised during the trial. However, Zuma, who laid criminal charges against Downer for allegedly leaking documents containing his private medical information to a journalist, said he should be allowed to lead oral evidence in this regard.

He said Downer’s conduct, if he is found guilty, could mean he could go to jail for up to 15 years and “this would be a fatal blow to his title to prosecute”.

Koen has already made a ruling on the so-called “leak”.

The document, put up in support of a bid for an earlier adjournment of the trial due to Zuma’s ill health, was vague and did not disclose any personal information. It was also put up by Zuma’s own legal team in their papers.

The ANC in KwaZulu-Natal wants the “divisive” step-aside rule repealed.
Politics
3 weeks ago

The National Director of Public Prosecutions has declined to prosecute the matter and has issued a nolle prosequi certificate, which means Zuma can go ahead with his planned private prosecution of Downer.

Downer denies any wrongdoing. In his affidavit filed at the ConCourt, he said Koen’s ruling that the special plea lacked a legal foundation was correct. He said there was no “plausible factual basis for his allegations that I am guilty of misconduct or criminal conduct”.

A private prosecution could be another stumbling block to the trial starting because Zuma will undoubtedly argue he cannot and should not be prosecuted by someone he is prosecuting.

There are many more bridges to cross before any evidence can be led in a trial which dates back to 2005. Zuma and Thales are facing charges of racketeering, corruption, money laundering and fraud charges relating to the arms deal.

Zuma is accused of receiving about R4m via his former financial adviser Schabir Shaik to assist Thales to secure defence contracts. Shaik was convicted in 2005 but released on medical parole in 2009.

For a 'dead' party, the ANC keeps us watching

For a party that is written-off by almost every pundit as dead and buried, the ANC continues to get way too much attention.
Opinion & Analysis
2 weeks ago

The Jacob Zuma Foundation has expressed its full confidence and support for its chairperson Dudu Myeni after her sentencing for obstructing the ...
News
3 weeks ago