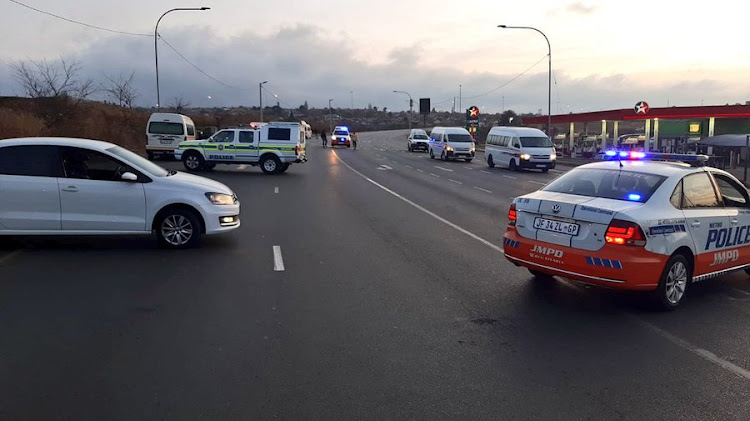 A crime scene at Zephania Mothopeng Street has shut a busy motorway in Orlando, Soweto, on Tuesday.
Image: JMPD

Motorists in Johannesburg have been advised to avoid Klipspruit Valley Road, which is closed between Kumalo Main Road and Martha Louw Street in Orlando, Soweto.

According to the Johannesburg metro police department (JMPD), a fatal shooting at about 8am on Tuesday in Zephania Mothopeng Street is the cause of the traffic build-up.

The JMPD cautioned that traffic in Orlando East and Orlando West was being diverted via Mooki Street.

The victim, believed to be between 25 and 30, was a taxi operator, it said. It is suspected this is part of an ongoing “taxi war” in the area, according to reports.

This comes just hours after Operation Buya Mthetho (bring back law and order), a joint operation headed by MMC for safety in Johannesburg David Tembe, conducted roadside checks in Soweto.

According to Google Maps, the main routes that are currently blocked are Reverend RTJ Namane Dr Andrew Mapheto and the R21.
News
2 weeks ago

KwaZulu-Natal motorist jumps into the sea to evade cops

A motorist fleeing from police in Ballito, KwaZulu-Natal, jumped into the sea on Friday night and clung onto rocks to evade arrest.
News
2 weeks ago

Taxi operators brought traffic to a standstill when they parked their vehicles at busy intersections in the Durban CBD on Monday morning.
News
3 weeks ago