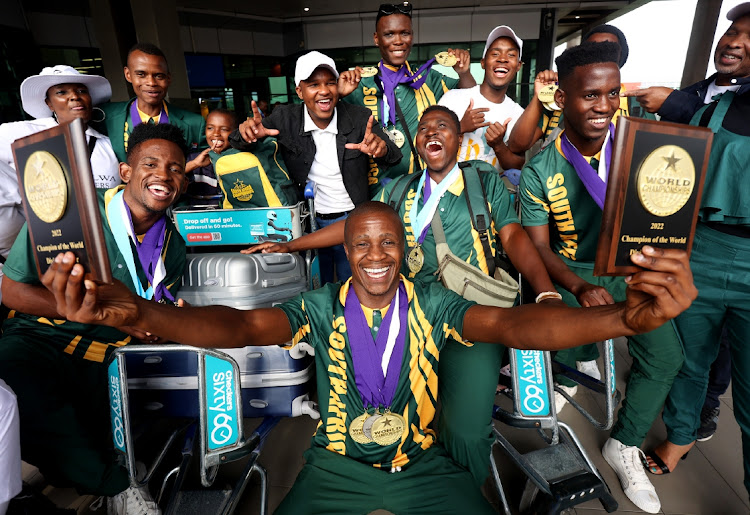 Derrick Mlambo, 53, led the group of a cappella singers representing SA at the competition called Word Championships in the US where they defeated 62 music groups from all corners of the globe.

Participants came from as far as Germany, Ireland, Indonesia, Thailand, the Philippines and many more countries.

The group received 32 gold and 18 silver medals with 5 overall trophies in honour of their “good work”.

Mlambo, who is also a teacher at Siphosethu Primary School Ntuzuma E, said he was “jubilant” when they raised the SA flag “to greater heights”.

Speaking to TimesLIVE, Mlambo said it was overwhelming seeing different countries competing with a township group established in 1990.

They received four gold medals in the category for groups singing without using musical instruments. They sang six songs: Peace in the World, Iphi Ntombi, My Refuge, Asenze Umehluko, The Mlambo Ngcuka and Ushobane.

“We only had one fear of what other countries would come up with as we were competing with top class singers. We had a lot of confidence as an isicathamiya group from SA as we knew what we were bringing to the stage when we sang with a cappella groups as well as other different art forms,” he said.

Mlambo said he has been singing isicathamiya tunes since the mid 70s.

"Our mission as Ladysmith Black Mambaso is to spread the culture of our country in music so it can reach everyone."
TshisaLIVE
1 month ago

“In my music I was highly inspired by Ladysmith Black Mambazo where I conjoined their sound with mine. In 1990,  I then formed Kholwa Brothers that was named after a school I was attending when I was young. We would also like to thank Lady Smith Black Mambazo for uplifting us as a group collectively. We would also like to acknowledge their role in isicathamiya music — for taking it to the world,” he said.

He hoped that most radio stations would now frequently play more  isicathamiya music to make people aware of the role it plays in society.

Gumede, one of the singers, said: “We are very happy as Kholwa Brothers. It was a huge achievement on our side. .”

An overjoyed Siziwe Mlambo, 51, was among those who welcomed the group back. was overjoyed at seeing the music group at the airport.

“I am shedding tears of joy of the achievements done by the group. This comes a long way. They would spent sleepless nights practising.  We would also like to thank the department of sports, arts and culture and other sponsors in assisting the group with financial help,” she said.

Linda Mbonambi, acting chief of operations officer in eThekwini Metro said: “We are very proud of the sterling achievement of Kholwa Brothers as we come a long way with the group. They’re one of the important brands that comes from Inanda, Ntuzuma and KwaMashu that we are proud of. We have a specific programme that had been set aside for branding talented individuals in terms of ensuring we help them to be able to capitalise on their skills.”

eThekwini mayor Mxolisi Kaunda is expected to host a reception on Thursday to welcome the group home.

Their music slices across time with its sweet yet anthemic quality, bridging the gap between what you know and what you feel.
Lifestyle
1 month ago

IN QUOTES| Ramaphosa on Shabalala: 'Our brother has left us to join the heavenly choir'