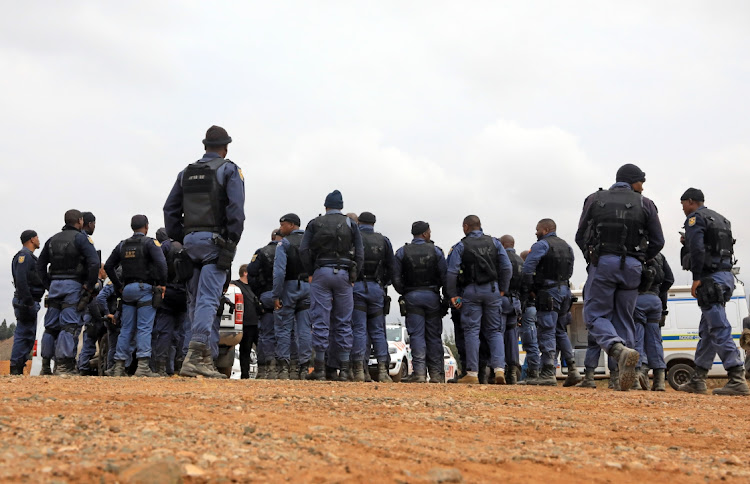 Police have been deployed to the West Rand to oust undocumented foreign nationals in the wake of a mass rape incident that occurred at a nearby mine dump. File image
Image: Thapelo Morebudi

Anger over the recent Krugersdorp mass rape by alleged illegal miners led to residents of Kagiso on the West Rand taking to the streets on Thursday morning, vowing to shut down zama-zama camps in the area.

Calm was swiftly restored by police, who have been on the ground all week.

Earlier, a main road in the area and access routes to Kagiso were blocked off by protesters.

@TrafficSA no way out of Kagiso Township today, R41/Randfontein road is a no go area, people from Randfontein should use R28 pass Krugersdorp..

Since Friday, Gauteng police have arrested 130 suspected illegal miners around West Village in Krugersdorp in an operation launched to find suspects who gang-raped eight women during a music video shoot at a disused mine dump.

Gauteng police spokesperson Brig Brenda Muridili said they have led multiple operations in efforts to clamp down on zama zamas and disrupt their operations.

“The team has arrested 30 undocumented people, bringing the total number to over 130 suspects that have been arrested since the province’s high level operations started on Friday July 29,” she said.

EUSEBIUS MCKAISER | Outrage about rape must be accompanied by action. Here’s what we might do

Criminals in SA are not scared of punishment. They worry about being arrested and charged, but know the odds of this are low
Opinion & Analysis
1 week ago