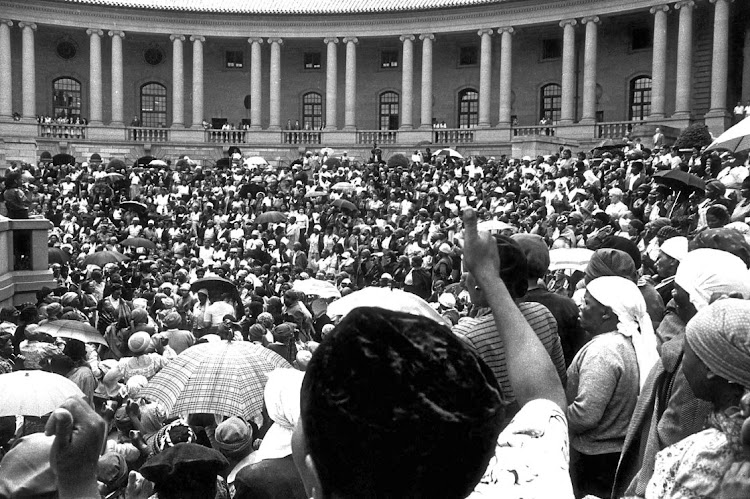 The Women’s March arrives at the amphitheatre of the Union Buildings in Pretoria on August 9 1956.
Image: File photo

SA commemorates Women's Day on August 9, paying tribute to the more than 20,000 women who marched to the Union Buildings on the day in 1956 in protest against the extension of pass laws to women.

Minister in the presidency for women, youth and persons with disabilities Maite Nkoana-Mashabane officially launched Women’s Month 2022 this week with a plea for justice for eight women who were gang raped in Krugersdorp.

The women were attacked, allegedly by a group of Zama Zamas, at an abandoned mine in the area last Thursday.

The attack sparked outrage and saw more than 130 undocumented suspects arrested in West Village, Krugersdorp. They are being held for contravening the Immigration Act.

Want to get involved? Here are some campaigns you can be a part of this Women’s Month.

Bata launched the #SuitYourSneakers campaign which is aimed at recognising how far women's rights have come since August 1956 and celebrating the achievements of women in all aspects of their lives.

“Being able to express oneself, without question, is one of the hallmarks of a free society. In line with this, we at Bata SA created an opportunity to let women celebrate and express themselves how they see fit,” said Bata SA marketing manager Nombuso Ncapai.

Artscape aims to be a haven for all communities as it showcases women this month.

The theatre centre in Cape Town will host the Circle of Care in solidarity with all victims of the Covid-19 pandemic and those affected by gender-based violence.

The Circle of Care aims to remember those who suffered by inhaling their hurt, pain and trauma, and exhaling their memories and wholeness in a peaceful, safe space.

Momentum has launched its fourth iteration of the annual Momentum #SheOwnsHerSuccess campaign. The 2022 edition considers the difficulties women face and provides thoughtful, practical advice and information to ensure women can keep striving for their goals.

“This year we acknowledge that while we live in an unequal society that can limit women, women can still own their success by persisting on their journeys,” said Charlotte Nsubuga-Mukasa, head of Momentum Brand Marketing.

“We have mobilised allies to help them along the way and we are very excited about the top individuals who will partner with us to facilitate our #SheOwnsHerSuccess workshops.”

The University of Johannesburg will host numerous events and seminars focusing on women’s empowerment under the theme “Women’s socioeconomic rights and empowerment: Building back better for women’s improved resilience”.

“Though we continue to celebrate, most women still do not have access to opportunities that empower them and their communities.

“Therefore, we must start reflecting on the challenges and expose women to opportunities that will contribute to their empowerment,” said the institution.

“Siweya will engage citizens in a dialogue about gender-based violence. Women’s Month allows us to measure how far we have come in transforming society, mainly the transformation of unequal power relations between women and men.

“While also focusing on and addressing gender oppression, patriarchy, sexism, racism, ageism, structural oppression and creating a conducive environment which enables women to take control of their lives,” said the presidency.

Speaking at the opening of Women's Month, the minister described the attacks as "despicable" and called for justice.
News
1 week ago

President Joe Biden said on Wednesday the Supreme Court and Republicans are clueless about the power of American women as he signed a second ...
News
1 week ago

Defence lawyers say they will appeal, while the US has made Russia a prisoner swap offer
World
1 week ago