N3 reopened after one killed in fiery truck crash 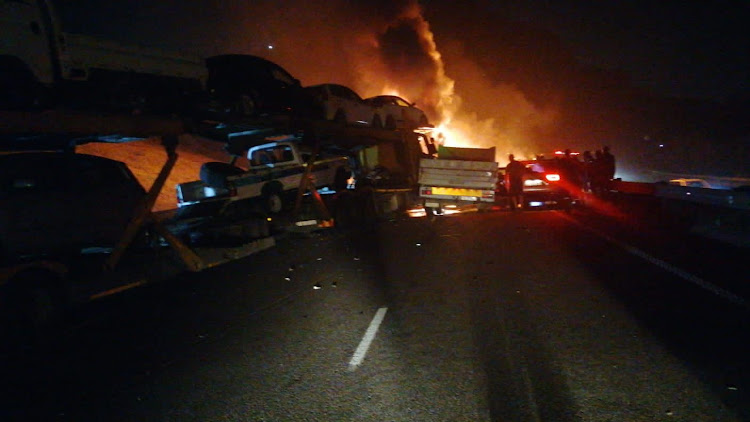 One person was killed when three trucks and a vehicle collided and caught alight on the N3 near the Marianhill Toll Plaza on Friday evening
Image: KZN EMS

The N3 has reopened after a major truck collision on Friday evening which claimed the life of one person near the Mariannhill Toll Plaza.

Netcare 911's Shawn Herbst said at least three trucks and one vehicle were involved in a collision on the southbound lanes shortly after 6.30pm.

He said all the vehicles caught alight and medics, police and fire and rescue members worked furiously to ensure the fire was contained and motorists were safe.

Reports indicate that multiple trucks, cars and a tanker were involved.

KwaZulu-Natal EMS spokesperson Robert Mckenzie said one person was airlifted to hospital in a critical condition.

The N3 to Durban was closed on Friday evening after a horrific crash before the Mariannhill toll plaza in Pinetown.
News
1 week ago

A passenger bus left the road and overturned on the R37 Lydenberg Road near Mbombela (formerly Nelspruit) on Thursday morning.
News
1 week ago

Two people were killed after their car lost control on a steep bend and plunged into a drain off Sani Pass Road in Himeville, KwaZulu-Natal, on ...
News
2 weeks ago