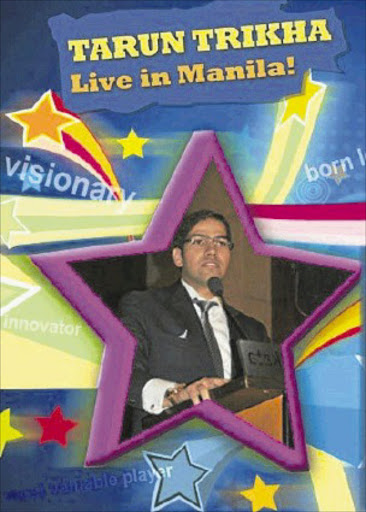 A poster for an appearance by Tarun Trikha in Manila

A high-flying 27-year-old Indian tycoon is behind an alleged pyramid scheme that the Reserve Bank and state-appointed forensic auditors say has amassed over R1-billion in just two years.

And, according to government investigators in the US, UK and China, Tarun Trikha's company, Travel Ventures International (TVI) Express, is worth at least $2-billion (R13.8-billion) worldwide.

Trikha lives in New Delhi and built his "billion-dollar success story" in just two years. He travels to over a dozen countries a month in his private jet punting his scheme. He claims to have recruited more than a million members globally.

According to local auditors, investors are required to pay a minimum "membership fee" of R2700. Then they receive a "travel voucher" - which is worth virtually nothing in some instances - and the opportunity to receive commission for recruiting other investors.

At least 100000 South Africans have invested in the scheme.

Attorneys and forensic investigators appointed by the Reserve Bank said they were dumbfounded by the scale of the scheme.

"We ultimately need to interview every single one of the investors. It's going to take a while," he said.

The SA team of investigators are also being asked to determine whether TVI Express is operating in contravention of the Banks Act of 1990.

Ironically, Trikha was this week awarded a licence by the Indonesian government to operate a commercial airline, Pacific Royale Airways - despite the fact that the US, UK, Chinese and Australian governments have barred him from operating TVI Express in their countries.

After interviewing investigators across the globe and in South Africa, as well as former representatives of TVI Express, the Sunday Times has established that:

The ACCC, in fact, recently won a judgment in the Australian Supreme Court prohibiting TVI Express from operating in Australia and is still investigating the company for other contraventions.

This week, ACCC spokesman Brent Rebecca said he was not at liberty to "discuss our investigations with the media".

An investigation by Australia's Daily Telegraph newspaper found that the company had recruited more than 5000 members in Australia since 2009 and more than 600000 worldwide.

In the US, TVI Express was recently served a cease-and-desist order that compels a company to stop doing business or face legal action.

Patrick Crosby, a spokesman for the US state attorney's office, could not be reached for comment despite several attempts.

Responding to questions from the Sunday Times, Trikha denied that he was operating an illegal pyramid scheme.

"Have you ever seen a pyramid scheme that lasted for three years ... because TVI Express has been around since January 2009 and it's expanding throughout the globe?" he said.

Trikha, who lists his permanent address as a luxury building in New Dehli's posh Karol Bagh suburb, said he was unaware that his company was being investigated in SA.

"We are not aware ... and TVI Express is more than willing to co-operate."

He added: "To show that we are conducting a legit business, some members (and investors) are in the SA Police Service."

Trikha has visited SA several times. He said his company did not have offices in the country and, instead, operated through the internet.

This week, Tempo Interactive, a business journal in Indonesia, reported that Pacific Royale Airways, which has acquired a fleet of 10 aircraft, had been given the go-ahead to operate between India and Indonesia.

On March 14, he tweeted: "Looking for a good slogan for Pacific Royale Airways. Send me your suggestions."

Trikha's TVI Express, the cash cow in his empire, is described on its website as a "billion-dollar success story".