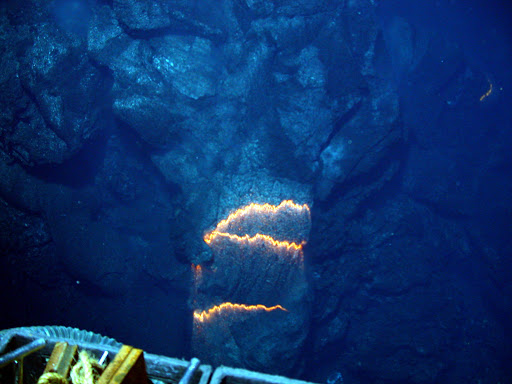 Bands of glowing magma, about 2,200 degrees Fahrenheit, are exposed as a pillow lava tube extrudes down slope. Image is about three feet across in an eruptive area about 100 yards that runs along the summit.
Image: NOAA/National Science Foundation

US scientists says they have for the first time successfully predicted the eruption of one of the world's most active undersea volcanoes off the coast of the western state of Oregon.

Scientists from Oregon and New York have been monitoring Axial Seamount, 400 kilometres out to sea, since it last erupted in 1998, and predicted it would again before 2014.

On an expedition to the area on 29 July, researchers using a remotely operated robot discovered a lava flow that was not there the year before, and began noticing that the entire area looked unfamiliar.

"When we first arrived on the seafloor, we thought we were in the wrong place, because it looked so completely different," said Bill Chadwick, an Oregon State University geologist who co-authored a 2006 study that forecast another eruption by 2014.

"We couldn't find our markers or monitoring instruments or other distinctive features on the bottom."

The team was using bottom pressure sensors, the same tools used to monitor the sea floor for potential tsunamis after an earthquake. A couple of their recording instruments soon turned up, and scientists determined that the eruption happened on 6 April.

The team was excited at the discovery, but cautioned that most volcanoes remain highly volatile.

"Forecasting the eruption of most land volcanoes is normally very difficult at best, and the behaviour of most is complex and variable," said Scott Nooner, a geophysicist at Columbia University's Lamont-Doherty Earth Observatory.

"We now have evidence that Axial Seamount behaves in a more predictable way than many other volcanoes."

Researchers were watching the level of the volcanic crater, or caldera, rise after its last eruption at a rate of about 15 centimetres per year as it inflated with accumulating magma, and predicted it would erupt again when it reached its 1998 level.

"The acid test in science -- whether or not you understand a process in nature -- is to try to predict what will happen based on your observations," Chadwick said.

"Now we can build on that knowledge and look to apply it to other undersea volcanoes -- and perhaps even volcanoes on land."