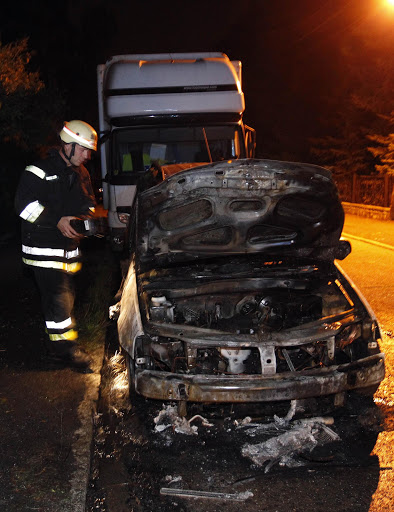 A fire fighter inspects a burnt car in the Koepenick district of Berlin August 19, 2011. German politicians urged tough action against a surge in arson attacks on cars in Berlin, blamed by some on the far right or far left, but by the police on common criminals. Nightly car-burnings have been going on for years in the otherwise relatively safe German capital but the number has recently surged, reaching 47 in the past three nights alone.
Image: Thomas Peter

At least 12 cars were torched in Berlin overnight Thursday to Friday, making it the fourth consecutive night such arson attacks have taken place, police said.

Berlin Mayor Klaus Wowereit has called for help from the public to help end the destruction.

"This is a case of pure vandalism and criminality," Wowereit told reporters.

He called on Berliners "to help arrest the culprits by reporting suspicious activity to the police".

Police have offered a $7 200 reward for information leading to the arrest of the perpetrators.

They believe the arson attacks are more likely the work of vandals than of politically motivated activists.

The total number of cars set ablaze in the capital this year stands at 159; 75 of them this month alone.

"But we believe it is mostly the work of a single person, or a single group of people, and that it is vandalism with no political motive," he added.