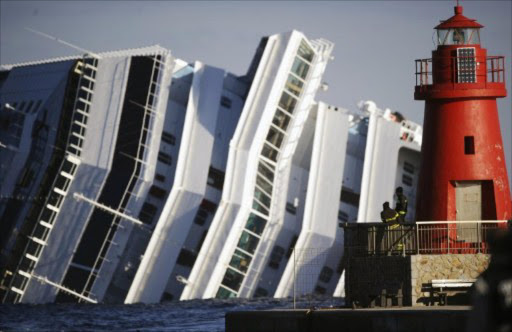 Italian coastguards urged the captain of a stricken cruise liner to return to his listing ship, leaked recordings showed, as divers continued their search for survivors into the night after finding five more bodies in the half-submerged wreck.

The discoveries took the known death toll to 11. A list of 28 missing people was posted on an Italian interior ministry web site, though authorities said that likely included the five found dead on Tuesday that are so far unidentified.

Captain Francesco Schettino has been allowed to leave jail but is under house arrest, blamed by his employer for risking the lives of more than 4,200 passengers and crew and half a billion dollars of ship in a reckless display of bravado.

Rescuers used explosives to blast through the maze of luxury cabins, bars and spas, fast losing hope of finding anyone alive inside the Costa Concordia, which lies semi-submerged on its side after being ripped open by rocks off a Tuscan island.

Dutch maritime services company SMIT said it was ready to start pumping fuel from the stricken liner as early as Wednesday once search operations for missing people have ended and they get the go-ahead from local authorities.

SMIT has been asked by the ship's owner and insurer to salvage up to 2,300 tonnes of fuel from the 114,500-tonne ship and clean up if fuel on the vessel starts to leak.

The giant cruiseship, a floating pleasure palace of bars, spas, state rooms and tennis courts, slid a little on Monday, threatening to plunge below the Mediterranean waters of the surrounding marine nature reserve.

This forced a brief suspension of rescue efforts, which were also halted overnight on Monday though searches were continuing through Tuesday night. A coastguard said they would go on until the entire ship had been checked.

Captain Schettino is accused of multiple manslaughter, causing a shipwreck by sailing too close to shore and abandoning ship before all his passengers and crew scrambled off.

He has denied the charges and told magistrates on Tuesday he believed he should be credited with saving "hundreds, if not thousands" of lives because he brought the ship close to shore after it hit a rock, lawyer Bruno Leporatti said.

A judge ruled he could be allowed out of jail on Tuesday and will be placed under house arrest at his home near Sorrento in southern Italy.

The skipper, who underwent toxicology tests, claims he did not abandon the ship while passengers were still aboard.

But newspaper Corriere della Sera released what it said was a recording of ship-to-shore radio communications in which the enraged coastguards repeatedly order him back on board.

"Listen Schettino, perhaps you have saved yourself from the sea, but I will make you look very bad. I will make you pay for this. Dammit, go back on board!" one coastguard says.

Speaking by radio from a lifeboat, Schettino pleads: "Do you realise that it is dark and we can't see anything?"

The coastguard shouts back: "So, what do you want to do, to go home, Schettino?! It's dark and you want to go home? Go to the bow of the ship where the ladder is and tell me what needs to be done, how many people there are, and what they need! Now!"

Officials did not confirm the tape's origins but other shouts heard in the background added authenticity. The Coast Guard official on the tape told a local newspaper he could tell by the "tone of the captain's voice" that something was very wrong. Schettino's lawyer said he would not comment.

The owners of the vessel - the biggest passenger ship ever wrecked and twice the tonnage of the Titanic - accused their captain of causing the disaster by sharply deviating from the charted course.

The ship foundered after striking a rock as dinner was being served on Friday night. The owners say the captain swung inshore to "make a bow" to the islanders, who included a retired Italian admiral. Investigators say it was within 150 metres of shore.

Most of the passengers and crew survived despite hours of chaos and confusion after the collision. The alarm was raised not by an SOS from the ship but mobile phone calls from passengers on board to Italian police on the mainland.

Video taken from a rescue helicopter in the early hours of Saturday, using a night vision camera, showed an extraordinary scene of dozens of passengers being gingerly lowered on ropes down the upturned hull of the ship into rescue boats.

The wreck, with a long gash below the waterline, looms over the normally tranquil island of Giglio.

The father of the ship's head waiter told Reuters his son had telephoned him before the accident to say the crew would salute him by blowing the ship's whistle as they passed close by Giglio, where both the waiter, Antonello Tievoli, and his 82-year-old father Giuseppe live.

Costa Cruises chief executive Pier Luigi Foschi on Monday blamed errors by Schettino for the disaster. He told a news conference the company would provide its captain with any assistance he required. "But we need to acknowledge the facts and we cannot deny human error," he added.

Foschi said company vessels were forbidden to come closer than 500 metres to the Giglio coast. Schettino denies being too close and says the rock he hit was not marked on charts.

The ship is resting in about 20 metres (60 feet) of water but could go down by as much as 130 metres if it shifts free from the rocks.