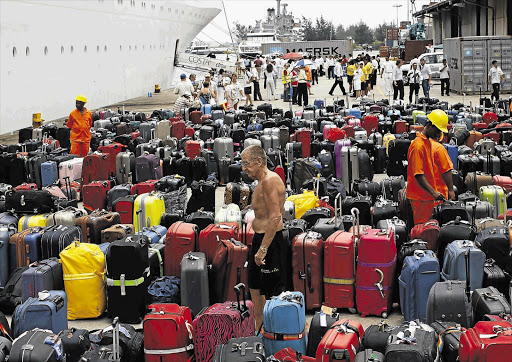 A passenger looks for his bags after alighting from the ill-fated Costa Allegra cruise ship at Mahe port in Seychelles yesterday. The crippled cruise liner, with more than 600 passengers on board, arrived at the Seychelles capital after three days of 'sheer hell' Picture: REUTERS

Passengers disembarking from the stricken Costa Allegra cruise ship have spoken of the panic and confusion on board as they endured three days of "sheer hell" adrift in the Indian Ocean.

As the luxury liner finally made it to shore, docking in Port Victoria on the island of Mahe in the Seychelles yesterday, some holiday makers expressed disgust at the way they had been treated and anger with Costa Cruises staff.

However, others said the crew were "great" and did all they could to assist after a fire broke out in the engine room on Monday, leaving the liner without power.

Conditions inside the cabins were said to have been "beyond horrific" due to the lack of air conditioning and running water. Toilets overflowed and people were fed on little but spam sandwiches. They were also forced to sleep on deck, in sweltering temperatures of up to 35C. They said the stench in the corridors and cabins was so bad it would remain with them "for a long time".

David Tinson and his wife, Denise, from England, accused Costa of "utter incompetence".

Tinson said: "They treated everyone like cattle, with absolute contempt.

"Sheer luck has disguised the incompetence from start to finish. Some people are blissfully unaware of how lucky they are."

More than half of the 636 passengers took up the offer of a seven- or 14-day holiday on the archipelago from the ship's owner, Costa Cruises, the same company whose giant liner Costa Concordia smashed into rocks off Italy in January.

One of the Costa Allegra's three diesel generators caught fire on Monday.

Although the blaze was extinguished within an hour or two, more generators in the engine room then failed, the ship's captain, Niccolo Alba, said.

Alba said a general emergency was declared when the generator caught fire. Lifeboats were prepared and passengers were ready to abandon ship as the liner drifted in the Indian Ocean.

A passenger from Germany said that when the power cut out, the passengers had been ready to leap into the lifeboats.

"Nothing was working so we realised this was not minor damage," he said. "The crew were great. They tried the best they could to make us comfortable."