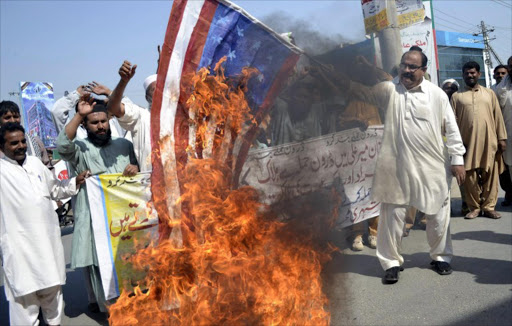 A Pakistani United Citizen Action demonstrator holds a burning US flag during a protest in Multan on October 25, 2012 against the US drone attacks in Pakistani tribal areas. File photo.
Image: AFP PHOTO / S.S MIRZA

A US drone strike killed a key Taliban commander, his deputy and eight others in northwest Pakistan, intelligence sources and tribal leaders said Thursday, deaths that could substantially alter the power balance in the Taliban heartland of Waziristan.

He had survived at least one previous drone attack and was wounded weeks earlier in a bomb attack believed to have been launched by Taliban rivals.

His key commanders and his deputy, Ratta Khan, were also killed in the attack at Angoor Adda, near the provincial capital of Wana, sources said.

Nazir had expelled foreign militants from his area, favoured attacking American forces in Afghanistan and had signed non-aggression pacts with the Pakistani military in 2007 in 2009. That put him at odds with some other Pakistan Taliban commanders, but earned him a reputation as a "good" Taliban among some in the Pakistan military.

Nazir's successor was announced in front of a crowd of thousands at his funeral, a witness said. People will be watching closely to see if fellow Wazir tribesman Salahud Din Ayubi continues with Nazir's policies.

The military has a large base in Wana, where Nazir and his men were based. Nazir presided over an uneasy peace between the militants and the army there, but the truce was endangered by the military's alliance with the United States and drone strikes, a military officer said recently.

"The (drone) programme is making things very difficult for us. Nazir is the sole remaining major militant leader willing to be an ally," he said.

"If he decides to side with (Pakistan Taliban leader) Hakimullah, thousands of fighters will come to the frontlines against the Pakistani military. It is in our interest to keep him neutral, if not on our side, because then we can direct our resources against anti-state militants with much greater efficiency."

PRAYERS FOR "OUR HERO"

Militants have launched a string of attacks in Pakistan in recent months, including shooting dead 16 aid workers and an attack by multiple suicide bombers on the airport in the northern city of Peshawar.

Residents said the main market in Wana shut down on Thursday to mark Nazir's death. The were calls over loudspeakers for prayers for his soul.

"The tribesmen are very grieved at his death as he was our hero. He had expelled all the foreign militants from our villages and towns and given real freedom to our people," a local shopkeeper in Wana bazaar, Siraj Noor Wazir, said.

Foreign militants, particularly Uzbeks, are disliked in some parts of the Pakistani tribal areas because of their perceived brutality towards civilians.

Nazir was wounded in the market in a bombing in November, widely believed to be a result of his rivalries with other Taliban commanders. Six others were killed in the same attack.

Both the Afghan and Pakistani Taliban draw support from ethnic Pashtuns, who live on both sides of the Afghan-Pakistani border. Rivalry between militant factions often reflects old rivalries between Pashtun tribes.

The army has clawed back territory from the Taliban since launching a military offensive in 2009. North Waziristan, along the Afghan border, is now the key Pakistan Taliban stronghold.

Pakistan's ally the United States is eager for it to push further forward into North Waziristan before NATO troops begin drawing down in Afghanistan in 2014 but the military says it needs to consolidate its gains.

Senior U.S. officials have frequently charged that some elements within Pakistan's security services retain ties to some Taliban commanders because they wish to use the Taliban to counter the influence of archrival India.

Four men in a car were killed in North Waziristan in a separate drone strike, local residents said. Their identity was not immediately known.

Intensified U.S. drone strikes have killed many senior Taliban leaders, including the former leader of the Pakistani Taliban, Baitullah Mehsud, in 2009.

The strikes dramatically increased when U.S. President Barack Obama took office. There were only five drone strikes in 2007. The number of strikes peaked at 117 in 2010 before declining to 46 last year.

Data collected by the Bureau of Investigative Journalism say that between 2,600-3,404 Pakistanis have been killed by drones, of which 473-889 were reported to be civilians.

Rights groups say that some residents are so afraid of the strikes they don't want to leave their homes.

"People of Wazir tribe are mourning Nazir's death but they are reluctant to attend his funeral because of fears of another drone attack," one resident said.

Civilian casualties are difficult to verify. Foreign journalists must have permission from the military to visit the tribal areas along the Afghan border.

Some Pakistanis say the drone strikes are an infringement of sovereignty and have called for a halt. Others, including some residents of the tribal areas, say they are killing Taliban commanders who have terrorized the local population.

The insecurity will be a key issue in elections scheduled for this spring. The nuclear-armed nation of 180 million has a history of military coups, but these polls should mark the first time one elected civilian government hands power to another.